This is a winning combination that I urge you to try whenever you find fresh pomegranates to play with. In our neck of the woods, it’s not always available. I prefer to buy the pomegranate seeds in those little jars because I am not too fond of the work needed to extract them from the fruit. Yes, I am familiar with all the tricks, but in this particular case, I opt for the easy way out.

Coat the cauliflower florets with the oil, season with smoked paprika, salt and pepper. Place in the air-fryer at 390F or as high as your fryer goes. Cook the florets until they start to get brown at the edges, shaking the basket every once in a while. While the cauliflower fries, make the sauce.

Mix all ingredients for the sauce (except the water) in a food processor and process until smooth. It will be very thick. Slowly add the water, until you get to the consistency you like.

Transfer the cauliflower to a serving platter, drizzle the sauce all over and sprinkle pomegranate seeds, as many as your heart desires.

Comments: I adore cauliflower and I am crazy for tahini. It was odd that it took me so long to put both together. If you don’t have pomegranate seeds, kalamata olives will work well for the contrast of color and that sharp flavor. A shower of black sesame or Nigella seeds could be great too. Anything to give some contrast to the cauliflower-sauce duet. Because our air-fryer is small, when I made this recipe there were no leftovers. Actually I did have extra sauce that was drizzled on all sorts of goodies for a couple of days. If you want to make this dish for company (or if you do not own an air-fryer), go for oven-roasting, 425F works like a charm. It just takes longer and the texture won’t be as crispy.

ONE YEAR AGO: Pistachio-Rose Donuts

FIVE YEARS AGO: Tangential Quiche with Asparagus and Fennel

EIGHT YEARS AGO: Grilled Chicken with Tamarind and Coconut Glaze

Another food trend I kind of twisted my nose at… grilled lettuce. How wrong can a person be? Very. I am here to gently invite you to the bright side. Don’t eye-roll, just trust me. It is absolutely delicious! You can do it on the outside grill or in the comfort of your kitchen using a non-stick grill pan, which is what I did. I don’t remember the husband getting so excited about a salad, but he gave this one two very enthusiastic thumbs up and insisted it must become part of our regular rotation. I am more than happy to “make it so.”

for the chickpeas:
1 can of chickpeas, drained, rinsed, and dried
olive oil spray to coat chickpeas
salt to taste
smoked paprika to taste (or other spice of your choice)

Make the dressing: combine all ingredients except water in a blender. Blend until smooth, then add water until it reaches the consistency you like. Reserve.

Make the chickpeas: coat them with oil, season and air-fry for 15 minutes or until golden brown. Alternatively, roast them in a 425F oven until done.

Grill the lettuce: rub olive oil on the cut surface of the lettuce, season lightly with salt and pepper. Grill for about 3 minutes, flip the pieces and grill for just a couple of minutes on the other side. Transfer to a serving platter, opening the leaves a bit so that the dressing can reach in between them.

Drizzle the dressing, add the roasted chickpeas, and serve.

Comments: You can grill the lettuce 30 minutes in advance, and just allow it to sit in the serving platter waiting for showtime. You must use Romaine, other lettuces cannot stand to the heat as well, although I did see some recipes using little butter lettuce heads cut in half. I have not tried to use them, to me they seem a bit too delicate. The dressing is so good I could eat it with a spoon. And of course, fried chickpeas take the concept of croutons to a whole new level. A little tip for you that worked super well for me: I air-fryed the chickpeas twice. After they were first made, I let them sit at room temperature, and then right before adding to the salad I fried them again for 2 minutes. The crispiness factor went off the charts. I have to try that again and write down some specific timing but keep this in mind if you own an air-fryer. Elaine and Karen, I am winking at you both!

ONE YEAR AGO: Asparagus and Snow Peas with Walnut Crumbs

FIVE YEARS AGO: The Joys of Grating Squash

When you need a side dish to impress, consider this one. Two simple veggies (contrasting colors is a must), joined with a delicious tahini-based sauce. Tahini, that component that makes so many recipes shine, does a great job here!

ZA’TAR ROASTED GREEN BEANS AND TOMATOES WITH TAHINI SAUCE
(from the Bewitching Kitchen, inspired by many sources)

Cherry tomatoes (red or a mixture of colors)
Green beans, trimmed
about 2 Tablespoons olive oil
1/2 tsp za’tar (or to taste)
salt and pepper

for the sauce:
¼ cup tahini
juice and zest of 1 lemon
about 1/4 cup water (amount will vary according to your tahini)
drizzle of honey

Heat the oven to 400°F. Coat the tomatoes with one tablespoon of olive oil, season with salt, pepper, and a sprinkle of za’tar. Place the tomatoes in a baking sheet in a single layer, large enough to hold them and the green beans later. Roast for 10 minutes.

Meanwhile, coat the green beans with the remaining tablespoon of olive oil, the remaining za’atar, salt and pepper to taste. Add to the tomatoes after they have been in the oven for 10 minutes. Roast all veggies together until the green beans are starting to brown (12 minutes or so longer).  As they roast, make the sauce by mixing all the ingredients in a small bowl, adjusting the amount of water to make it a nice drizzling consistency.

Transfer the roasted veggies to a serving platter, add the sauce, sprinkle with sesame seeds and serve right away. 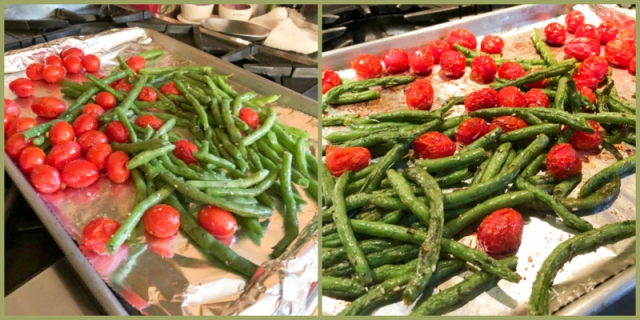 Comments: Amounts are quite flexible for everything in this recipe, and I suggest you try the tahini sauce as you make it. Different brands, and also how well you are able to mix the tahini before measuring will have a big impact on the outcome. For my taste, lemon juice should be added with a heavy hand, but then a touch of honey mellows it beautifully. I almost added pomegranate molasses, but left that for a next adventure. When I brought it to the table,  I heard a “oh, wow!” from the husband. And as we enjoyed it with juicy chicken legs, life seemed almost normal. Which is as nice a feeling as one can have these days.

ONE YEAR AGO: Brazilian Pao de Queijo (re-blogged from the past)

TWO YEARS AGO: The Chignon

THREE YEARS AGO: Rack of Lamb Sous-Vide with Couscous Salad

FOUR YEARS AGO: Focaccia with Grapes, Roquefort and Truffled Honey

As some of you might know, I don’t like to apply the word “healthy” to a recipe. Just a pet peeve of mine. But it is hard to resist using it in this case. Sweet potatoes are full of nutrients that are good for you, and in this preparation they get the right amount of luscious that makes them almost festive. Cutting them into wedges makes them cook faster, so no problem considering this side dish for a weeknight meal. 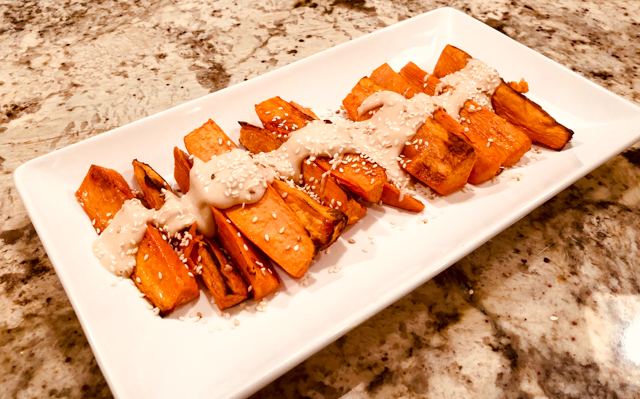 SWEET POTATOES WITH TAHINI SAUCE
(from the Bewitching Kitchen)

Coat the potatoes with olive oil, season lightly with salt and pepper. Try to massage the oil around them, so they are well coated. Spread them in a single layer over a baking dish covered with aluminum foil. Roast them for 15 minutes, move them around and roast for 10 to 15 minutes more, until fully cooked and starting to get golden brown at the edges.

Prepare the sauce by mixing all ingredients together and whisking very well.  The sauce will thicken as it sits, so don’t make it too thick to start with.

Place the potatoes on a serving dish, spoon the sauce over, and finish with toasted sesame seeds. 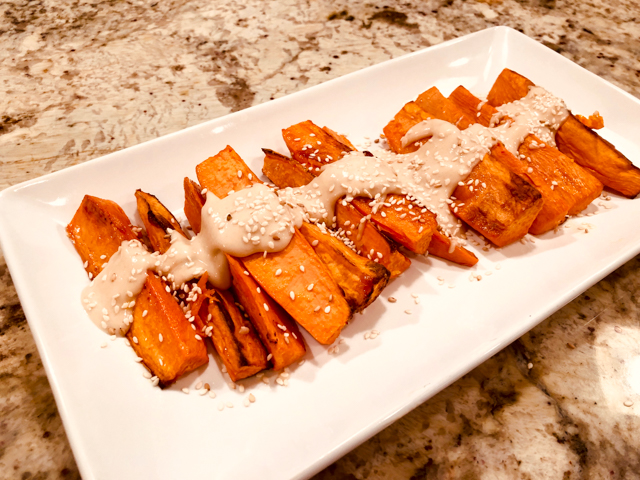 Comments: I think tahini and sweet potatoes are another example of a match made in Nirvana. Save any sauce leftover and use it over other veggies like broccoli, or drizzled over roasted salmon (yes, another a bit unusual but nice move for tahini).

I visualize this recipe again, with some pomegranate seeds added to this party. Color and freshness never hurt.

ONE YEAR AGO: 30-Hour Leg of Lamb with Mashed Sweet Potatoes

FIVE YEARS AGO: Mini-Quiches with Duxelles and Baby Broccoli

NINE YEARS AGO: Bran Muffins, not just for Hippies

This side dish was the marriage of two regular appearances in our kitchen: quickly sauteed zucchini and air-fried chickpeas. The union was celebrated with a nice amount of tahini sauce.  I tell you, this worked very very well. If you don’t have an air-fryer, roast the chickpeas in a 400-420F oven. It takes longer and the texture won’t be quite as crunchy, but it will work just fine.  I intended to sprinkle pomegranate seeds right before serving for a little extra bling, but of course that day the grocery store had ran out of them. Best laid plans. 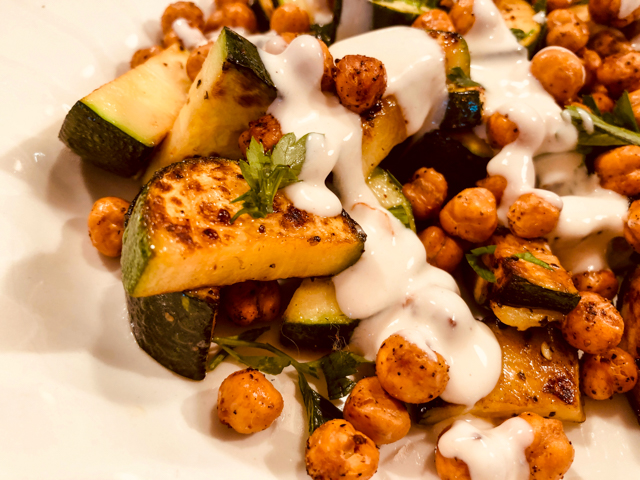 LEMONY ZUCCHINI AND CHICKPEAS WITH TAHINI-SAUCE
(from the Bewitching Kitchen)

Make the tahini sauce: whisk all ingredients in a small bowl. Reserve.

Make the air-fried chickpeas.  Coat them lightly with olive oil, add the spices and place them in the air-frier set at the highest temperature (usually 390F) for about 12 minutes. They should be crunchy and golden brown.  Reserve.

Heat the olive oil in a 12-inch non-stick skillet, add the zucchini covering the whole surface, season with salt and pepper. Let the slices cook undisturbed until the side in contact with the pan is well seared. Move the slices around and cook until done. Sprinkle lemon juice all over, cover the pan for a minute, remove the lid, add the chickpeas and parsley.  Serve immediately with the tahini sauce on top.

Comments: When I was a child, teenager or even young adult, you could not bribe me to eat chickpeas, which in Portuguese have the non-appealing name of “grão-de-bico”. It translates – loosely – as “the grain of the beak”. They can also be called “ervilha-de-galinha”, which ends up as “chicken’s green peas”. Yeah, very sexy. How could anyone consider that a delicacy? Anyway, now I crave it. Go figure.

Leftovers were delicious a couple of days later. In fact, I found out that air-fried chickpeas, when microwaved just enough to make them warm, get a nice texture, a bit more creamy inside. My lunch coupled this tasty concoction with a fried egg on top.  I was smiling the whole afternoon.

THREE YEARS AGO: Going naked, and my husband loved it

SEVEN YEARS AGO: Into the Light Again

NINE YEARS AGO: The Nano-Kitchen

Eight heart-shaped cookies on my blog today, six from Tunde's tutorial @tundescreations and two of my own. Love is definitely in the air!
Bewitching Kitchen
Blog at WordPress.com.
Loading Comments...
%d bloggers like this: