Would you like to bake bread with wild yeast, but the thought of   keeping a starter is too intimidating?  If that’s the case, I urge you to read this great post by Joanna, from Zeb Bakes. She will make you feel absolutely at ease with keeping the starter going, minimizing your work and the use of flour. She will also show you a simple schedule to bake bread on a weekly basis.  Awesome read! Sourdough baking made simple and easy, as it should be.

Now, time for some fun with it.  Remember the proofing bread box I gave myself for Christmas?   Well, I put it to the test, by making a batch of sourdough bread and dividing the dough in two.  Half went into the cozy environment of the box (78 F), half stayed outside in my kitchen kept (at this time of the year) at around 70F.  The recipe I chose for such a ground-breaking experiment comes from a great baker, who blogs at Breadcetera.  You can learn a ton of stuff from him, make sure to bookmark his site and visit often.   He developed this technique called “double flour addition,”  with the goal of maximizing the amount of air bubbles trapped in the dough from the very beginning of mixing.  These tiny air bubbles, created by whisking the very loose mixture of flour and water, later generates the pockets of air that every baker searches for in this type of rustic loaf. 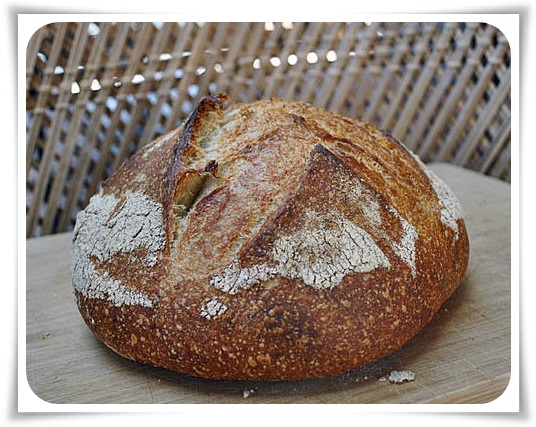 Combine the flours in a large bowl and lightly mix them with a whisk.

Add the water and the sourdough starter to the bowl of a Kitchen Aid mixer, and use the whisk attachment to work them together at the lowest speed for a minute or so.  At this point, you only need to combine them and have the starter dispersed through the water.    Add just 75g of the flour mixture, and increase the speed of the mixer to level 3. Whisk until the mixture seems quite aerated (about 3 to 4 minutes).

Remove the whisk attachment and place the dough hook in place. Add the rest of the flour, and knead for a couple of minutes, until the flour forms a shaggy mass.  Cover the bowl with plastic wrap and let it rest for 20 to 30 minutes.

Sprinkle the salt over the dough, and mix on speed 3 for 6 minutes.  Place the dough in an oiled bowl, cover and let it ferment for 2 hours, without any folding or kneading.  Divide the dough in two equal pieces, and lightly give it a round shape.   Let it rest for 15 minutes for the gluten to relax,  and do a final shaping, creating surface tension by pulling the sides of the dough up as you gather it all in the “boule” shape.   Place the balls of dough, seam side up, in a floured round container (such as a brotform), cover with plastic, and let it ferment for 3 hours at 78 F.

Invert the dough on a peel, score, and bake at 425 F for 40 minutes, with steam during the first 15 minutes.  Let it completely cool before slicing.

For my experiment, I divided the dough in two right before the first fermentation, and placed one half in the proofing box.   That dough stayed in the box until baking time, the other one stayed over the kitchen table, protected from drafts.  The difference in the dough itself was pretty dramatic, but I could not get a picture that was good enough to show it. However, once the bread was baked, the one from the proofing box had much better oven spring, the other one was a bit on the flattish side.   Both were delicious, and the crumb had a nice structure, but one bread looked a lot “healthier.”   Here they are… 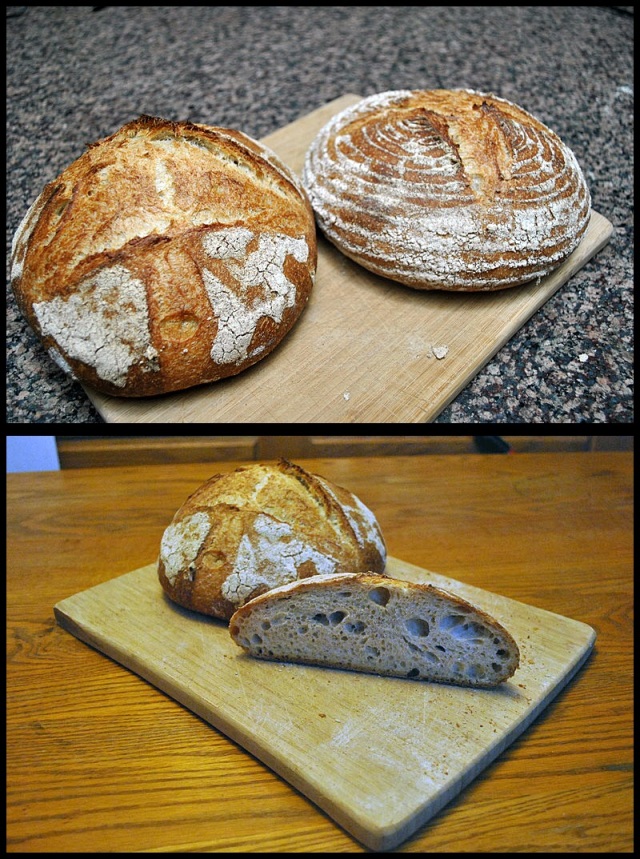 You can see that the taller bread, with a more round shape, had better oven spring, bursting through the slashing with greater power. Sorry, no photos of the crumb, we froze that baby for later and by the time we got to enjoying it, I forgot to grab the camera. 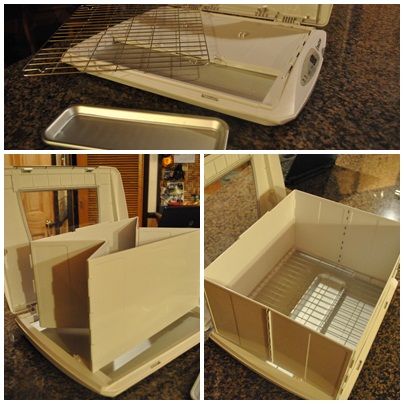 The bread proofing box not only optimizes the temperature, but also provides the correct amount of humidity, thanks to the small dish that sits at the bottom of the box, with some water in it.  No need to worry about a skin forming on the loaf in the final proofing, no need to use plastic to cover it.  A very well designed machine, that is getting constant use in our home.

ONE YEAR AGO: Shrimp and Fennel Casserole

31 thoughts on “A SOURDOUGH EXPERIMENT”