SPOILER INSIDE!
If you have not watched the show,
save this post to read later

Maybe you already guessed what I’m talking about. DESSERT: Episode 4 of the Great American Baking Show.  The first one that had me waving goodbye at my buddies as they got into the bus for the tent early in the morning.  I stayed behind, alone and broken inside, it was one tough day for me. In part because that was the episode I was most excited about. I was quite happy with my madeleines, but over the moon with my cheesecake tower. As you know, I am not wild about sculptures (to put it mildly). I guess a cheesecake tower, of all the assembled desserts, is probably the simplest, like a three-tier cake, you just have to make sure they are secured in place. Of course, even though it sounds doable at home, the tent is a place that often generates its own gravitational anomalies.

They had to present 24 madeleines, 12 of each kind, made from genoise, and iced. The thing about madeleines is the famous “bump.” If they are flat, they are never going to be handshake-worthy, no matter how tasty they are. Many factors affect the bump formation, the amount of leavening agent, the way you handle the batter, but from my madeleine adventures, I think the key is to cool the batter after piping. Five to ten minutes in the freezer gave me the best outcome. We had 1 hour and 45 minutes to present them. I practiced and practiced, and was able to keep the piped tray in the freezer for both batters for 7 minutes without having to pull my hair out to have them done in time.

Same batter, left was baked straight from room temperature. Right was baked after 7 minutes in the freezer.  Amazing, isn’t it?  Chill your batter, my friends!

Here are the two kinds I designed for the tent… 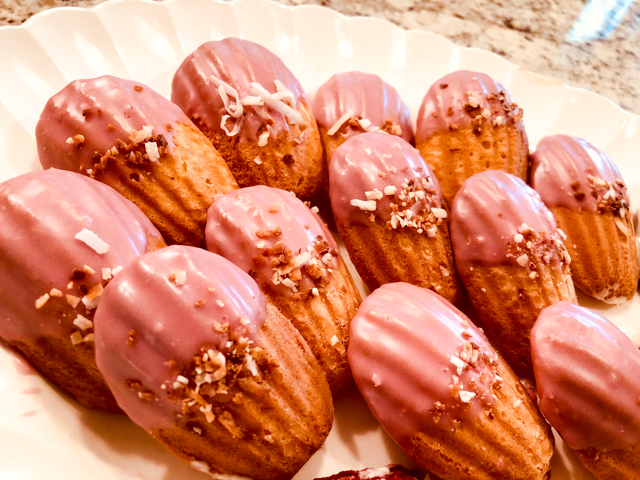 They had coconut in the batter and were iced with Hibiscus tea glaze, decorated with sweetened, toasted coconut. My friend Dana had hibiscus madeleines also, proving that great minds madeleine alike.  I was looking forward to trying hers and comparing notes. Sadly, it was not to be.

I wanted to explore different takes on holiday season, and chose hibiscus because in Jamaica it is used in  the most popular drink to celebrate the New Year.  Coconut closes the tropical deal.  As to Red Velvet, what can be more festive, no matter where you are?  I know Sherry is not too wild about red velvet cake, but I was hoping red madeleines dressed up for party would win her nod of approval. 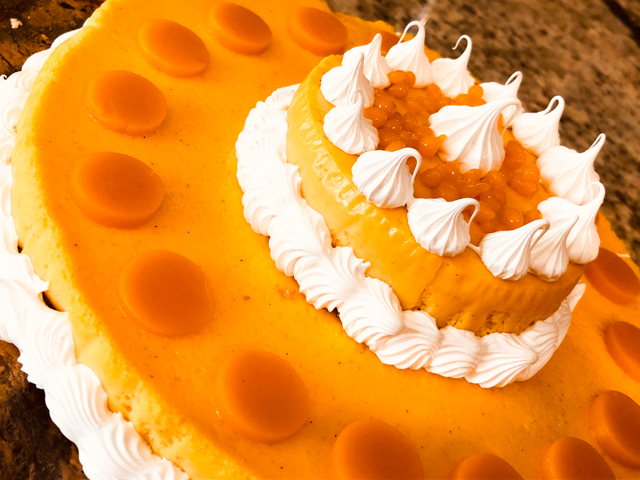 Once again, I wanted to show what the end of the year is like for those living in places like Brazil. They are ready for the sun, the beach, for a true Summer break, and my cheesecakes tried to bring a ray of sunshine to the American holiday season.  I chose Açaí and Mango as basic flavors, and dressed them up with a layer of thin genoise with contrasting color designs.  Timing was a big, big issue and I knew I had to work non-stop and very efficiently. But I was really looking forward to it.  My pictures do not reflect the final product, which would end up as a mixture of them.  I had to play with the mango component quite a bit to maximize the flavor, and my first decoration with the toasted meringue did not please me very much.  So the “tent-version” would have the mango-agar decorations on top.

I was also going to change the color pattern, and use the purple cake around the mango ones, the orange around the açaí. Finally, the top cheesecake would be a tad smaller in diameter, so that the concentric pattern of the middle tier would be more visible.

I loved the flavors and in my opinion they went together well, açaí with that unique flavor that was mellowed down by some blueberries added to the party. Of all episodes, maybe this one was my favorite. I cannot tell you how sad it makes me that I was not able to do any of it in the tent. I think both Paul and Sherry would like  my Tropical Cheesecake Tower. Of course, there are plenty of uncertainties when you bake in the tent. Would the big cheesecake set? Would I be able to bake all the cake sides and have them nicely arranged? Would they enjoy the agar components or frown their noses at them? 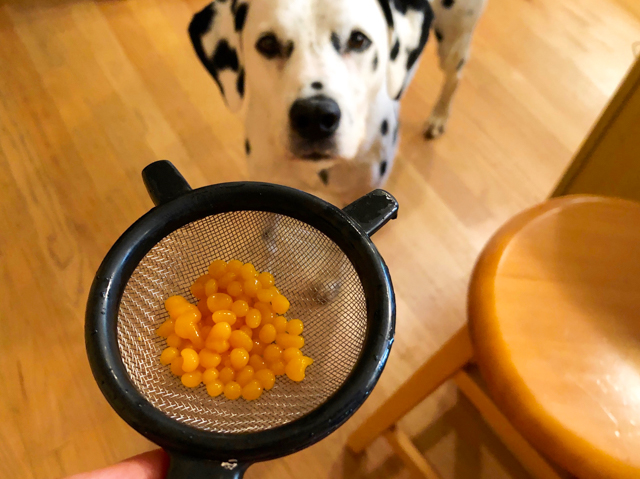 I cannot give you a handshake, but I will wag my tail anytime for you, Mom!

So that was the end of another episode, in which Marissa got Star Baker with her madeleines and cheesecake combination, plus a good performance on a very tricky technical. The Queen of Puddings!  I need to make that at some point, very curious about it.

Sadly, another baker had to leave the tent…. 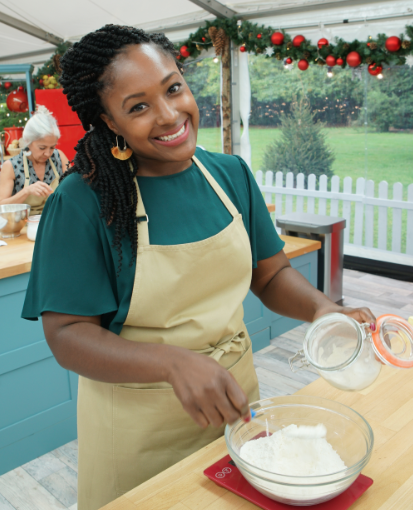 Bianca was eliminated, and I am sure it was very sad in that tent. If I had to pick ONE adjective to describe her,  it would be SWEET. Just LOOK at her picture, and if you saw her on the show, you’ll know it is the perfect adjective. Adorable could go well also. Sweet and adorable. I am good with that now. Her mind works at 120mph, as she thinks about her next bake, about tweaks she could do here and there.  We would be sitting in our “green room” for hours, and Bianca would be sketching things on her notebook, lost in her thoughts, then all of a sudden would go “hey guys, what do you think about this?” – and the ideas would pour, her creativity is unparalleled. Did I mention she is adorable? And drop-dead gorgeous.

I need to talk a bit about her Cake episode. Here we have a person who SHINES at cakes. Cake is her thing, all the way. And she has the incredibly bad luck of cutting her finger on a mandolin. Badly, I must add. They did not show the extent of the stress she was subjected to, and we all thought that it would be almost impossible for her to come up with a cake with the time that she had left. So all her amazing decorations had to be forgotten. Can you imagine her frustration? I mean, I could say that macarons are my thing. The idea that I would bake a batch in front of the cameras that would somehow explode and I would have to start all over and be unable to decorate them…. leaves me paralyzed. That’s pretty much what happened to sweet-adorable Bianca.  And it broke my heart. She is a fighter though, and showed such resilience and ability to perform under pressure.  She baked a cake, decorated as much as time allowed, and proudly showed it to Paul and Sherry. I am sure they were as impressed as everyone around.

Since the show ended, she got engaged to her lovely boyfriend, whom we had a chance to meet in the UK. She is happy and full of goals and dreams for the future. I wish her all the luck and will be following her adventures. You can do it too, here is the address of her blog.

TWO YEARS AGO: Slow-Roasted Eye of the Round Beef