In case you’ve missed my big announcement:
4 days to showtime!

It is a bit hard to believe but my last Incredibly Simple post was 7 months ago, back in May. Better late than never, here I am to share with you four non-recipes that are a regular rotation in our kitchen. 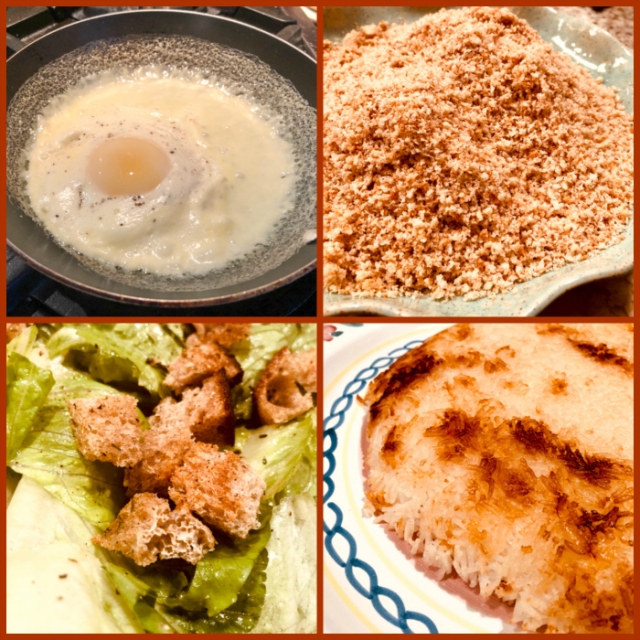 Pour the cream in the skillet. Break the egg(s) and place them gently over the cream. Season with salt and pepper. Turn the heat to medium and let the cream come to a boil.

When the eggs are almost fully set, remove from heat and cover with a lid for a couple of minutes (this will finish the egg  cooking to a perfect texture)

Sprinkle more salt and pepper if so desired, and serve over your favorite side dish.

I used to make bread crumbs in the food processor. I thought I was so virtuous and clever. Until I got a particularly hard baguette that refused to cooperate with the efforts of my Cuisinart.

First picture shows the “crumbs” made in the processor. The other two show a before and after using the Vitamix, pulverized in less than 30 seconds!  I am so in love with it, will never use any other method. I apologize if this is common knowledge but I decided to share just in case someone was living in the same cave I’ve been living, as far as bread crumbs are concerned.

Cut bread into crouton size. Place in bowl. Spray with olive oil or drizzle a little oil all over and mix well. Season with Herbes de Provence, a touch of salt and pepper.

Place in air-fryer set at the highest temperature for 5 to 8 minutes, shaking the basket a couple of times if you remember to do that (no big deal if you just leave them there unattended).

The croutons will have perfect texture and just the right amount of oil.

We love rice, particularly Persian-style, with that delicious crust called tahdig. Most recipes are pretty involved, but I got this shortcut method that works surprisingly well. My apologies if I abuse a very traditional recipe, but let this be a profession of my love for it, and the desire to have it as quickly as possible at the dinner table.

Mix the yogurt with the saffron and salt. Add to the cooked rice. If rice was in the fridge, warm it in the microwave for just a minute to bring it closer to room temperature before adding the yogurt.

Drizzle olive oil on a 10 inch non-stick skillet. Place over medium-high heat, when the oil starts to get nice and hot, spoon the rice/yogurt mixture in a layer covering the bottom of the pan. Place a towel on top, close the lid. Keep it on low-heat for 20 minutes, check to see if it is golden underneath, increase the heat to medium-high until it gets to the color and crust you enjoy.

You might have to make the recipe once or twice until you get it just right.

So there you have it, four super simple recipes for you to choose from.  Fried egg is my favorite kind of lunch, and since I have no cholesterol issues, I can fry it in heavy cream without feeling too guilty. Obviously, I don’t do it on a daily basis. The tahdig is definitely a weekly thing. If I want to cook it from scratch, I bring a large amount of salted water to a rolling boil, pour 1 cup of rice in the pot, cook it stirring every once in a while for 12 minutes. Drain, and proceed with the recipe. It turns out a little better in terms of texture than using pre-cooked rice from the fridge. It does add another 15 minutes or so to the preparation, but it’s worth it.

ONE YEAR AGO: White Chocolate and Raspberry Mousse Cake

FIVE YEARS AGO: In My Kitchen, December 2014

SIX YEARS AGO: Braised Fennel with Saffron and Tomato

SEVEN YEARS AGO: Revenge of the Two Derelicts