Recently I blogged about a new way to roast veggies that stole my heart. At that time, carrots were the star of the show. Now, I share my second experiment with the method, following a recipe from the same issue in Fine Cooking, applied to cauliflower. A couple of tips are important for maximal deliciousness. First, do not cut the florets too small, keep them a bit chunky. Second, make sure to leave a flat, large side when you cut them. That will provide better browning during roasting.  The roasted cauliflower is finished with a mixture containing a lot of ginger and other Indian spices. Read my thoughts about it in the comments. 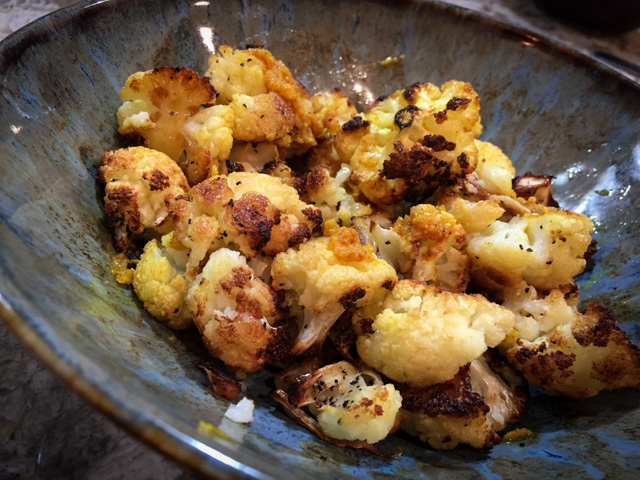 Position a rack in the center of the oven and heat the oven to 450°F.

On a large rimmed baking sheet, toss the cauliflower and garlic with 3 Tbs. of the oil, 3/4 tsp. salt, and a few grinds of black pepper. Arrange the florets flat side down in a single layer. Cover tightly with foil and transfer to the oven to steam for 10 minutes.

Carefully remove the foil, rotate the baking sheet, and roast until the bottom side is nicely browned, 10 to 15 minutes. Flip the cauliflower and continue roasting until just tender and deeply browned, 10 to 12 minutes more.

Meanwhile, heat the remaining 2 Tbs. oil in a small skillet over medium-low heat. Add the ginger and cook, stirring, until fragrant, about 1 minute. Remove from the heat and stir in the coriander, turmeric, and cayenne. Swirl in the lemon juice.

Transfer the roasted cauliflower to a serving bowl. Add the spice mixture, and toss gently. Season to taste with more salt, if needed, and serve. 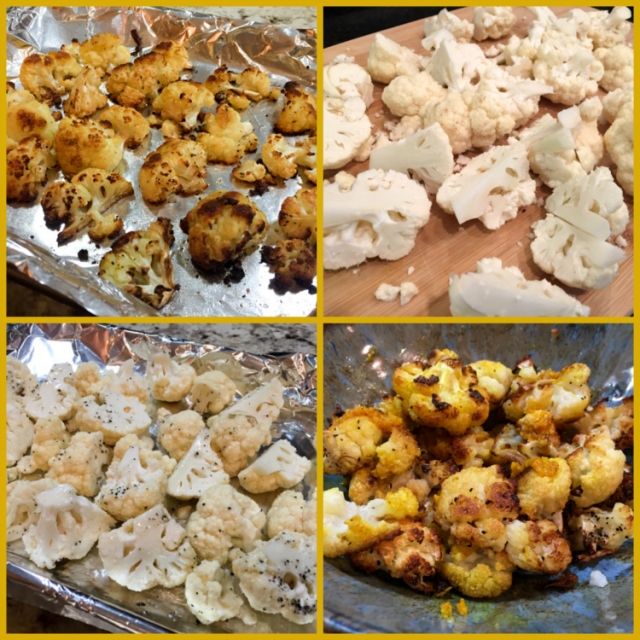 Comments: Once again I found the method wonderful to deliver perfectly roasted cauliflower florets. Now, about that spice mixture. I notice quite often these days that many recipes follow what I like to call The Ottolenghi Path:  they call for the addition of many spices and herbs to a dish, often in unexpected combinations. That is not necessarily a bad thing, he is for sure a gastronomic genius, but there is also something to be said about a simply roasted veggie, with a smidgen of olive oil, salt, pepper, and perhaps a single added spice. Of course, cookbooks, magazines, cooking shows, they all need to come up with clever, exotic ways to make food, otherwise, why would we bother paying attention to them, right?  Anyway, in this particular recipe I felt that the addition of the sautéed spices plus the lemon juice messed up slightly the texture of the roasted cauliflower, and also overpowered its flavor a bit. Granted, it made the dish feel more festive. But, if you are in the mood for a classic approach, omit it all, roast it, and serve it as it is. You won’t be disappointed. I will be steam-roasting cauliflower again and again, either in its natural state, or using this recipe with the following modifications: cut the ginger by half, keep the turmeric and coriander, add some lemon zest, and omit the lemon juice and cayenne. That might be a real winner for me.

ONE YEAR AGO: Creamy Zucchini-Mushroom Soup

Sugarprism painting for a few more Halloween-inspired cookies... Swipe for additional version with another timid attempt at Zentangling away (those made with a food pen)... There are sugar cookies flavored with pumpkin spice (and all things nice). HAPPY HALLOWEEN, stay creepy!
Loading Comments...
%d bloggers like this: