Disclaimer: these are not meatballs, they are actually vegetarian. But it’s hard to avoid the association. Eggplant Balls? Eggplant Morsels? Nah, neither one works for me. Plus, “meatballs” is  the way Katie Lee referred to them in the FoodTV show The Kitchen, so I can always lay blame on her. Having said that, these are pretty awesome. A bit more work than you might expect, but worth it. What makes them a bit more involved is the fact that you must (according to Katie) process each component separately.  Other than that, a very straightforward method, for a tasty alternative to meatballs. 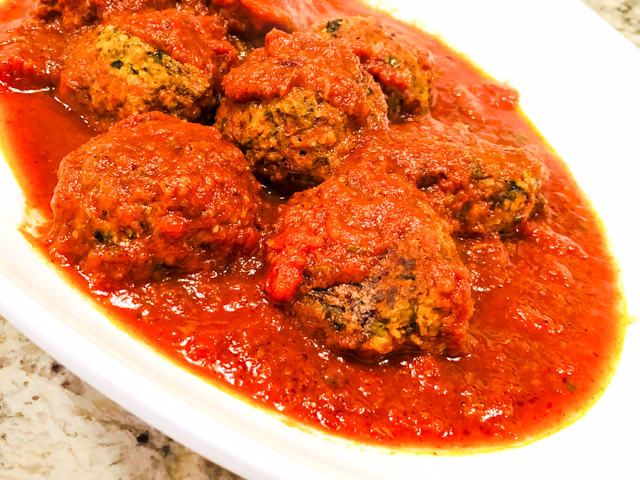 Place eggplant in a large mixing bowl and slowly drizzle with 1 tablespoon olive oil. Stir and drizzle in an additional tablespoon of oil. Sprinkle generously with salt and pepper and toss to combine. Spread on a prepared baking sheet. Combine mushrooms and remaining teaspoon oil and spread on remaining baking sheet.

Bake eggplant and mushrooms 10 minutes, then stir and bake an additional 10 minutes.

Use a small ice cream scoop or yours hands to scoop eggplant mixture into 12 balls and arrange on reserved lined baking sheet. Bake until crispy and browned, about 20 minutes. 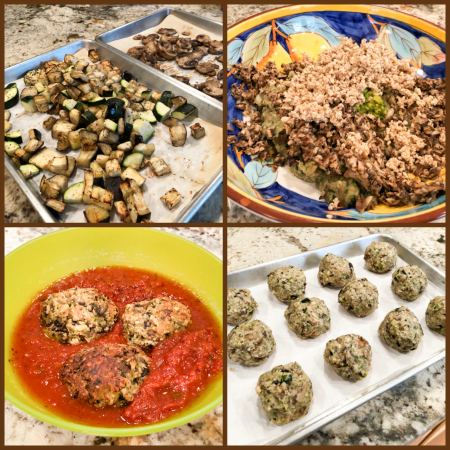 Comments: This was our dinner on a Monday, so I prepared everything up to the final roasting on the day before. It would be too hard to make it after work, but if you can spread the preparation in two days, it is perfect. Less than 30 minutes and a nice dinner is ready for you. I took them into a more Italian territory by warming up some tomato sauce and serving with them. These are quite delicate, so don’t try to simmer them covered in the sauce, they might fall apart.  Mine were probably more fragile even, because since my eggplant was a bit small, I included one zucchini in the mixture.  Zucchini has quite a bit more moisture, and I should have adjusted the amount of panko to account for that.  I am giving you the original recipe, and advise you to stick with eggplant and mushrooms only.

Making them the day before also helps them retain the shape during baking, but you could stick them in the fridge for an hour or so and proceed with roasting.  It is nice to reduce the amount of meat we consume, so these are quite likely going into our regular rotation. They could work well also as appetizers, making them smaller and serving with a dipping sauce, perhaps a tahini-yogurt to keep with the Asian flavor, if so desired.  Two thumbs up from both of us, omnivores at heart…

ONE YEAR AGO: Uzbek Flatbread

SIX YEARS AGO: Pasta and Mussels in Saffron Broth