After more than 6 years in the blogosphere, I often ask myself which types of recipes are “blog-worthy?” If you get a T-bone steak, season it with salt and slap in on the grill, is it worth writing a post about? Well, maybe it is if you come up with a twist on how to cook it to perfection, but… that would be a stretch. I prefer to share recipes that have some element of surprise in the ingredients and/or method of cooking. This one is a good example. Simple grilled chicken thighs, but involving a vinegar-based marinade that is also used in the initial stage of cooking before the meat hits the grill. The original recipe, known as Cornell Chicken, has been around for a while. You can read about its interesting development here. I noticed this variation in a cooking forum after many members raved about it. I made it twice in two weeks, trying to perfect it to our liking, which in the case of chicken thighs means a yin-yang kind of deal: meat falling off the bone plus crispy skin. I haven’t arrived there yet, but the recipe is great even in its original form. After all, what is perfection to me might not be the same for you. Give this recipe a try, it’s totally worth it. Unless of course, you are a vegetarian. In this case, skip this post. I will have something to please you soon enough…

Strip any stems from all of the herbs, and chop them well – they should equal about a half cup total when they are all chopped. Whisk together the olive oil, vinegar, egg, salt and pepper. The egg is to keep the mixture emulsified, and though it is often left out of the original recipe, it works better with it. Whisk in the chopped herbs.

Trim the excess skin and fat from the chicken thighs, and pat dry with paper towels. Put the chicken in a large ziplock bag with the marinade.  A couple of times a day, flip the bag over and move everything around a little to make sure all the thighs are getting marinated.

After 24 – 48 hours, take the chicken out of the fridge. Arrange the thighs in a large saute pan or dutch oven – it is best if they can all lay flat, but if you don’t have a big enough pan for that, get it as close as you can. Pour over the marinade, and set the burner at medium. Watch carefully, and when it starts to boil, turn it down to barely simmering. After 10 minutes, turn each piece carefully, and cook another 10 minutes. Remove from the heat.

Get your grill heated up, and be sure to oil the grates. Once the grill is well heated, place the chicken, skin side down, on the grates. You may have some flare up because the oil is going to drip down some, but a spray bottle of water kept handy will take care of those. Don’t turn the chicken until you can pick it up off the gates without tearing the skin – when it is ready to turn, it will come up easily. This will take around 8 to 10 minutes, depending on your grill. Brush the marinade over the upper side a couple of times during cooking. Turn and grill the second side for another 5 to 8 minutes. If you like, check the internal temperature, which should be about 165 F. Let it rest around 5 minutes before serving.

Comments: I made the recipe the first time exactly as written. The flavor was great, and the crispy skin just the way we like it. The apple cider vinegar is the key ingredient, acting as a tenderizer but also imparting subtle acidity. I heard from people who made this recipe several times that leaving in the marinade for 48 is a good idea, but do not go longer than that. I loved the copper color of the skin as it crisped up on the grill… 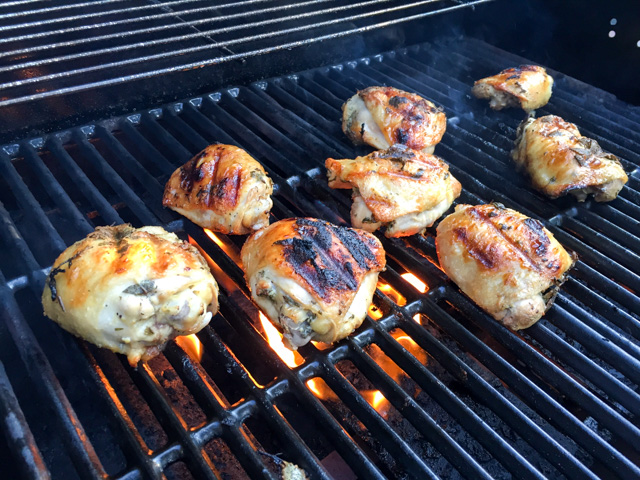 Dinner is served!  Grilled chicken thighs, cauliflower mash, and a fresh salad…
Grab a fork, and dig in!

As I  mentioned in the beginning of the post, I wanted to get a slightly more tender texture in the meat. So, the second time around I opted to sous-vide the meat in the marinade using water displacement instead of a vacuum-seal, and cooked it as described in this previous post. It all seemed to be going great, but disaster hit:  I was careless while grilling the pieces skin side down, and…. the thighs were charred to death. Black. Burned skin.  I was able to save some pieces for our dinner, but let’s say the looks were definitely not blog-worthy…  Oh, well. Lesson learned. Here’s the plan: repeat this recipe one more time using my favorite method, which is low and slow, then blasting it on a hot oven, or as I intend to do it, on the hot grill. Watching over it as a hawk. A hawk, I tell you!

Ready to grill?
(image from this source)

THREE YEARS AGO: Into the Light Again

FIVE YEARS AGO: The Nano-Kitchen