As you may have noticed, I have a soft spot for all things language. Frustration took place as I tried to figure out the correct spelling for the name of this delicious Thai soup. It is often tricky to go from a language such as Siamese  to something that would convey the correct pronunciation in English. After a lot of searching around, I found a video that made me even more puzzled. In the video, they spell it as Tom Kha Kai, but when I listen to the girl my ears detect a clear sound of G for the third ideogram, making Tom Kha Gai my preferred way to spell it.  You can listen for yourself and decide. Click here and fast forward to 1 min and 50 seconds. No matter how you decide to spell it, this is a delicious and very simple soup with all the contrasting flavors that are typical for the cuisine of Thailand. 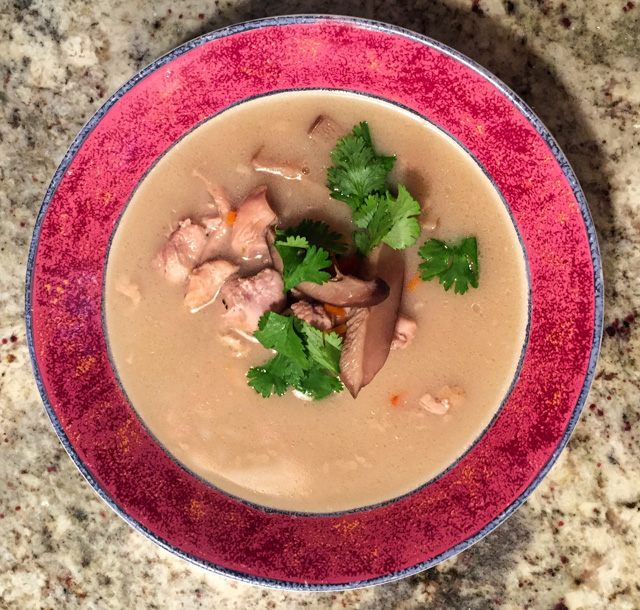 In a slow-cooker, combine chicken stock, lemongrass, fish sauce, brown sugar, galangal,  lime zest, chicken and mushrooms. Cover and cook on high for 2 ½ hours (or on low for 4 hours). Add coconut milk and shredded carrots, and cook on high 30 minutes longer (or on low for 1 hour). Stir in lime juice and cilantro leaves.  Serve topped with additional fresh cilantro, if desired. You can also save the soup without the coconut milk and carrots, and add those when re-heating on top of the stove for about 15 minutes, until the carrots are just cooked.

Serve while pretty hot, with a squeeze of fresh lime juice right on the bowl to brighten up the flavors even more.

Fishing out the lemongrass…

Comments: What a delicious soup!  Oddly enough, I am not too fond of shiitake mushrooms in stir-fried preparations, even if they are quite popular in Oriental recipes. Something about their texture turns me off a little. But in soup or risotto, I love them. They do impart a lot more flavor than regular mushrooms do, and in this soup they are definitely a must.  Lemongrass is also a favorite flavor of mine, and we are lucky to have a very healthy lemongrass plant growing in our backyard. When I need it, I go out with a pair of scissors and cut a stalk very close to the ground.  The smell is just amazing…

I made this soup on a Sunday and as so often happens, it was my lunch three days in a row. I ran out of cilantro on day 2, but it was not a big deal. At all. Adding the coconut milk at the very end of the cooking time together with the carrots make sure that the carrots retain some of their bite, and the coconut flavor seems brighter than if it cooked for hours from the beginning. Little details matter, especially when using the crock pot. That dump and forget approach is definitely not the tastiest path…

No slow-cooker? A regular pan will work, just keep the soup at a simmer until the chicken is cooked through, then add the coconut milk and the carrots for a while longer.

The combination of marinade and hot-sour sauce for this recipe came from Rachael Ray’s show, “Week in a Day”.  She used it to flavor chicken legs and pork ribs, but I went on a slightly different route and applied it to butterflied pork tenderloin.  The marinade is superb, but what made the dish ultra-special was the sauce to be served alongside.  Heads up:  the sauce starts with a ginger-infused simple syrup that must cool down before the other ingredients are added. Start early… 😉 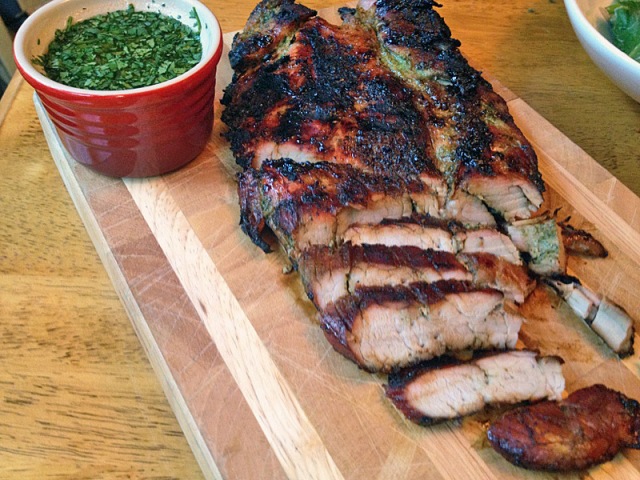 For the marinade: Combine the cilantro, brown sugar, honey, soy sauce, fish sauce, garlic, chile peppers, ginger and the white part of the lemongrass in a blender or food processor. Puree until smooth. It will be fairly thick.

Place the butterflied pork inside a plastic bag or a pyrex baking dish, and pour the marinade all over it, massaging the pork to coat well. Add the lime slices, close the bag or cover the dish with plastic film. Place in the fridge for 1 to 4 hours, the longer the better.

While the meat marinades, make the sweet and sour sauce. Combine 1/2 cup water, the sugar and ginger in a small pot. Bring to a simmer, stirring to dissolve the sugar, then cook gently for a couple of minutes to infuse the syrup with the ginger. Pour the syrup into a small bowl and let completely cool. Remove the ginger, then stir in the vinegar, cilantro, mint, Sriracha, fish sauce,  and lime juice.

Remove the meat from the fridge 30 minutes to 1 hour before cooking.  Heat the grill on high. Right before grilling, brush off most of the marinade, and cook the meat to your liking (about 12 minutes total, flipping the meat halfway through the cooking time).   Let it sit tented with aluminum foil for 10 minutes before slicing at an angle.

Serve with the sauce alongside.

This recipe was a big winner, it crossed the finish line like Usain Bolt , leaving all other recipes behind! Intense flavor all around, I swear I could eat that sweet and sour sauce by the spoonful, it is addictive.  Thick, sweet, gooey, spicy, hot, I could not stop pouring it over the meat… Phil at some point asked “would you like some meat with your sauce?”    😉   I blame the Sriracha. It gets me every single time.  I hope you try this recipe, don’t let the number of ingredients scare you, once you get the marinade and the sauce ready, it’s pretty much a done dinner deal.

ONE YEAR AGO:  A yummy Brazilian cake: Bolo de Fuba

THREE  YEARS AGO: Leaving on a jet plane…