I am thrilled to share this post today, because it gives me the chance to invite all my readers to visit a new blog, a blog that started from the experience of 9 lucky campers baking together in a certain tent in London. Our cozy virtual spot is The Home Bakers Collective, and we want it to be a place to share culinary experiences, stories,  recipes, and also get feedback from readers. Every month one of us will design a group project and we will work independently on it and show our concoctions on the last day of the month. Sounds like fun?  I definitely think so.

Helen was the first to come up with something for January. Her brief: make a roll cake inspired by your favorite cocktail or drink. It did not take me very long to settle on my choice: a Cosmopolitan-inspired cake!

VIRGIN COSMOPOLITAN ROLL CAKE
(from the Bewitching Kitchen, filling adapted from this site)

Make the piping decoration by beating the butter with powdered sugar in a small bowl until fully combined. I used a hand-held electric mixer. Add the egg whites and beat for a couple of minutes. Add the flour and mix by hand with a spoon, divide in three portions.  Color them black, pink and green.

Draw the design you want to have on the surface of the cake with a pencil on parchment paper that fits a half-sheet baking pan. Invert the paper so that the pencil mark is at the bottom. Pipe the icing using a very thin piping tip. Freeze the whole tray with the decoration for at least one hour. When the time is almost up, prepare the cake batter.

Heat oven to 400°F.  Sift the flour and baking powder into a small bowl. Reserve. Place the egg yolks in the bowl of a standing mixer fitted with the paddle attachment. Sprinkle 100 g of granulated sugar over the yolks, and beat on high speed until the mixture ribbons and is very pale and thick, about 8 minutes. Add the lime zest and lemon extract. Beat until just combined.

Place the egg whites in a clean bowl and fit the standing mixer with the whisk attachment; beat on medium-high speed for 1 minute. Sprinkle the cream of tartar and salt over the egg whites and continue beating on medium-high until soft peaks begin to form. Reduce the speed to medium, then slowly stream in the remaining 100 g granulated sugar and continue beating until the whites are glossy and stiff but not dry. Fold one-third of the beaten egg whites into the yolk mixture. Gently fold half of the sifted flour mixture into the yolk mixture, then half of the remaining egg whites. Gently fold in the remaining flour mixture, followed by the remaining egg whites. Transfer the batter into the pan with the frozen pattern on it, and very gently smooth the top into an even layer with an offset spatula. Bake the cake until it begins to pull away from the sides, about 8 minutes.

Transfer the pan to a cooling rack, cover the cake with a towel and let it cool fr 10 minutes. Remove the towel, sift a little powdered sugar over the surface and flip it over parchment paper. Gently peel off the paper with the design, flip the cake again over a towel with a little dusting of powdered sugar on the surface. Starting with a short side of the cake, roll the cake gently, using the towel to support the cake as you go. Let the cake cool all rolled up in the towel, seam side down.

Prepare the filling. Cook cranberries, sugar, pomegranate molasses and a splash of water in a saucepan on medium heat until the cranberries break down and into a thick, juicy mixture. Puree the cranberries in a high-speed blender until perfectly smooth. Chill. You will need ½ cup of this mixture to make the buttercream.

Put the soft butter, sifted sugar, cream of tartar, and 1/2 cup of the cranberry-pomegranate puree into the bowl of a stand mixer fitted with the whisk attachment. Beat, scraping down the sides often, for about 4 minutes, until light and fluffy.  Unroll the cake, fill and roll back, keeping the seam down.  Slice and serve. 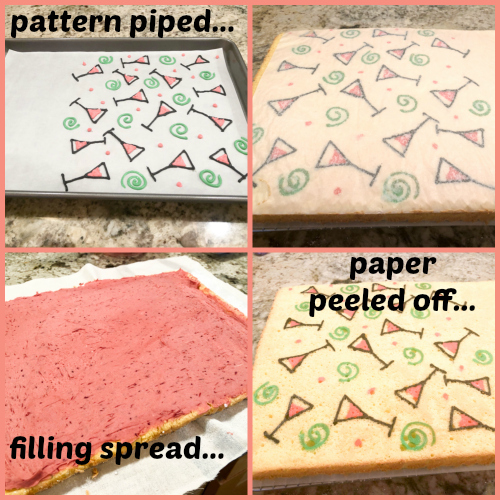 Comments: If you are intimidated by baking a cake with a “printed” pattern, please don’t be. Even if you are artistically challenged like me, simple drawings are easy (although I must say my hand was shaking a bit when I started piping). Just remember that different colors piped side by side will mix. Pipe the outline first, put the baking sheet in the freezer for 10 minutes, and add the second color to fill the design, if that’s the case.  For my Virgin Cosmopolitan glasses, I did all the black outlines first, froze it, and finished with pink and green after.  It is a lot of fun, particularly that moment in which you peel off the parchment paper.

Also keep in mind that you don’t need to have the design on the whole area, as some of it will be rolled and hidden.  I just made sure I covered enough not to go into “pattern-anxiety.”

I tried two different recipes for the cake itself, and settled on the one I am sharing. You need to get good volume as you beat the yolks and later the whites, and use a gentle hand to mix them together. The baking powder made the cake rise quite a bit more than a version I made without it. I think you might get by with 3/4 tsp of baking powder for the same amount of batter.

The filling. I wanted to add fresh pomegranate seeds after spreading the buttercream, but that day I could not find them in the two main grocery stores in town. I got some frozen but they are just to watery and I skipped them. Be warned: do not taste the cranberry/pomegranate buttercream before spreading on the cake, or you might not have enough. So, so delicious! I actually had leftovers that went into some macarons the following week. At the present time, I have 6 macaron recipes patiently waiting to be shared with you. I know. Some obsessions do not seem to end.

I hope you enjoyed my little roll cake, but please make sure to stop by “the collective” to see what my friends came up with (post might take a couple of hours to be published, just try a little later if it’s not there  yet). I heard that next month’s challenge will be pretty cool, but until then we’ll have some cool stuff to share with you. Stop by to say hello, we would love to have you there.

ONE YEAR AGO: Bouillabaise for a Chilly Evening