Lately I’ve been playing with different, fun ways to slash sourdough boules. One thing led to another, I found myself buying a Craftsy online lesson by Ciril Hitz called The Baker’s Guide to Artisan Bread Shaping.  One of the breads that caught my eye was The  Tabatière,  a classic French style bread (from the region of Jura), shaped to resemble a purse used to hold cigarettes. Talk about traditional bread baking, this is it.  I got so excited about this recipe that I pushed all other blog posts to the side to share it with you right away.

The formula of the bread is actually quite simple, you can use any dough you like, as long as it’s more on the firm side to stand the shaping. For instance, for two small loaves, mix about 1kg dough at 65% hydration.  Roughly that would be 600g flour (you can use a mixture of white with a touch of whole wheat or spelt), 390 g water, 12 g of salt, 3 g of  yeast. Once the bread goes through the bulk fermentation, preferably in the fridge, you can divide it in two, pre-shape them as a ball, then proceed with the final shaping.  You can also follow this recipe that calls for a pre-ferment instead, making a single Tabatiere with it instead of two. Again, the most important here is the hydration level to be kept more or less at 65%.

IT ALL STARTS WITH THE DOUGH…. 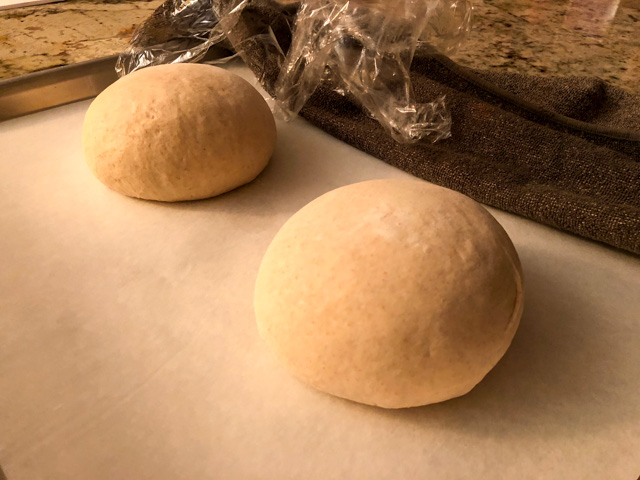 Each ball more or less 500g of dough at 65% hydration. Any combination of flours you like.

Now place your rolling-pin on the top third of the dough, and roll it to form a flap. You want it to be large enough to cover the whole extension of the other 2/3 of the dough. That’s getting there, but not quite… 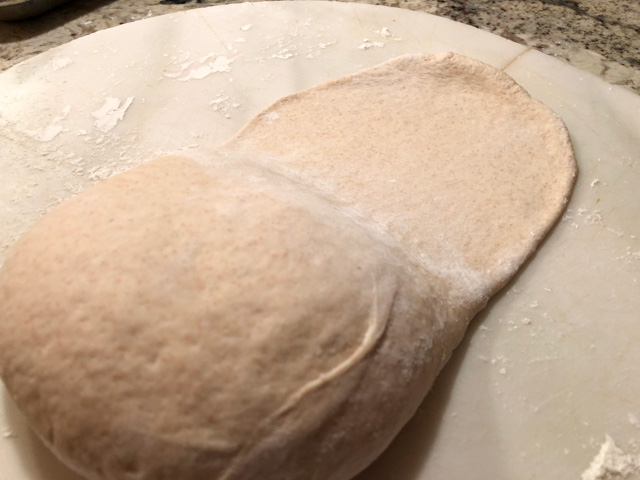 Once it’s the correct size, brush a little olive oil right on the edge, so that the flap will not glue to the ball of dough, and once in the oven, it will be more open.

This composite photo hopefully shows you how the whole process is done.

Once the little “purse” is shaped, let the bread rise for 90 minutes at room temperature. Next, give it a nice sprinkle of flour, rubbing it gently on the surface. And with a decisive frame of mind, but keeping in mind that you do not want to cut all the way through the flap you covered the bread with, slash it.  You can use any pattern you like, but this one is considered the most authentic. Slash from the bottom to the top. 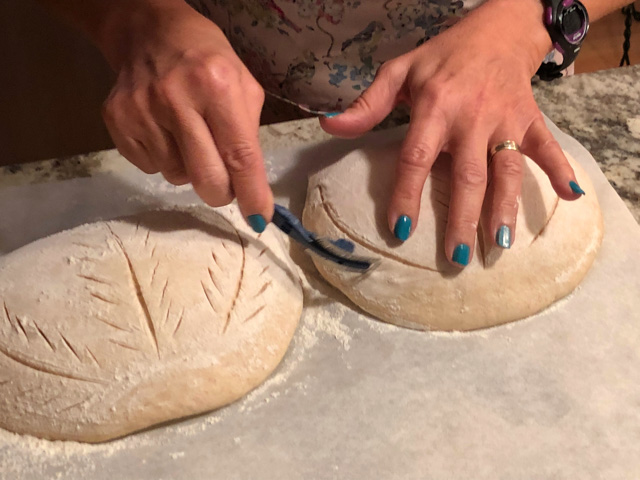 There, the beauty is ready for the oven! 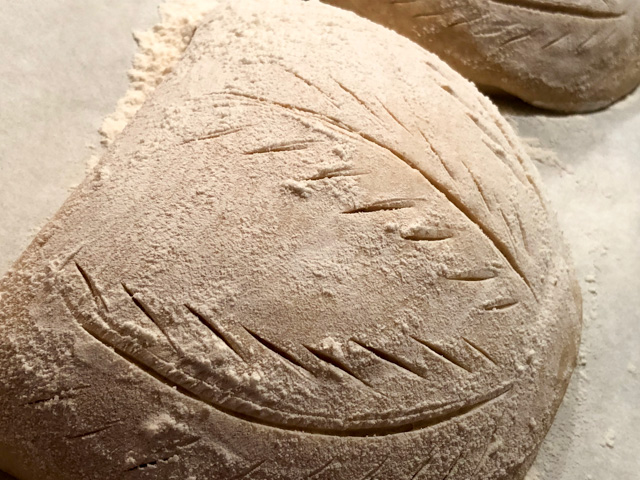 You can bake it in a covered Dutch oven with a moistened lid to generate steam, or use any other method you like.  I baked the two loaves at the same time, one using the Dutch oven, the other using a clay cloche from Emile Henry.  The outcome was quite different, as you can see below

The top one was baked in the clay cloche so the dusting of flour stayed nicely on the surface. The second loaf, under additional steam, had the flour pretty much baked into it, generating a darker crust.They are different, I have a hard time deciding which one I liked the most. It was good to know, though, that baking in the clay cloche worked quite well. 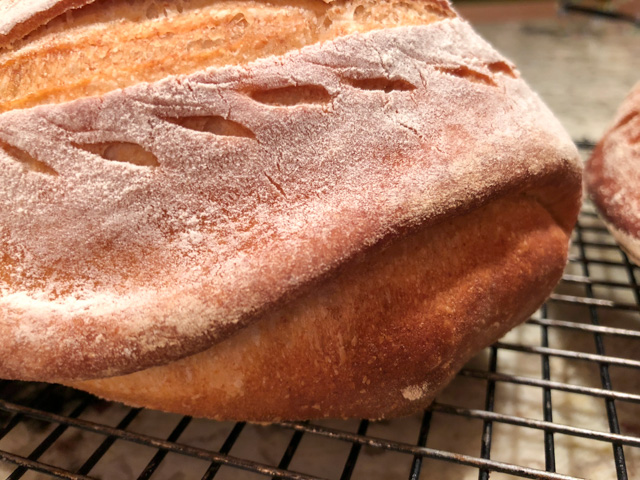 The “lip” of the purse could have lifted a little more, I suppose I should have stretched it thinner and maybe added a bit more olive oil, but overall I’m happy with the way it turned out. 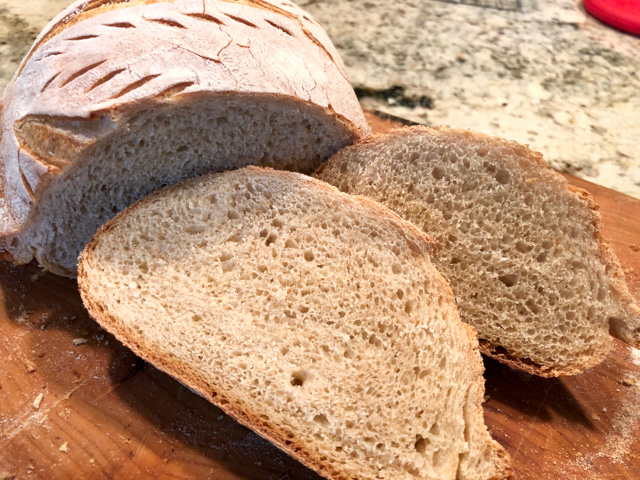 The crumb is more on the tight side of the spectrum, as expected from a bread with low hydration level.  I am quite curious about the possibility of using a sourdough formula for the Tabatière; I might experiment with it in the near future.

I cannot recommend Craftsy classes highly enough.  This particular lesson from Ciril Hitz is simply outstanding!  From baguettes to very sophisticated bread shapes (Sun Dial is unreal), you will learn to bake them all. Clear instructions, pretty much in real-time. Brilliant!

If you are into bread baking, consider getting this online class. Worth every second. And no, I do not make a single penny from your purchase. As with everything else on my blog, I only recommend it if I absolutely love it.

ONE YEAR AGO: Curry Turmeric Sourdough

23 thoughts on “THE TABATIERE”