With the tragedy in Newtown, 2012 could not have ended on a sadder note.  That Friday I returned home  early to wait for friends who were driving from Oklahoma to visit, and when I turned on the TV  I couldn’t believe my eyes.  But nothing prepared me for the email I received shortly thereafter from my friend Farine, saying that her grandson Noah was among the young victims.  I was folded in two,  as if someone had punched me in the stomach.  I know the same feeling hit thousands and thousands of people around the world, but it’s nothing compared to the pain of the families who lost their loved ones.  It was such a senseless and cruel action.

Farine mentioned that in his young life Noah struggled with an important decision: whether to become an astronaut or a taco store manager.  He loved tacos so much.  I’d have probably advised him to first become an astronaut,  and then set up his taco shop on a beautiful, peaceful planet around some distant star…    😉    Today I share a recipe that I’m sure would please Noah.  It’s found in “Just Tacos“, a book by Shelley Wiseman, who works in Newtown and was devastated by the catastrophe.  Shelley not only gave me permission to print her  recipe, she also asked me to dedicate it to Noah and his family.

The tacos are ultra-special, as a result of their corn tortillas tinted with hibiscus flowers.  The pork cooked in tomatillo sauce is simply amazing! 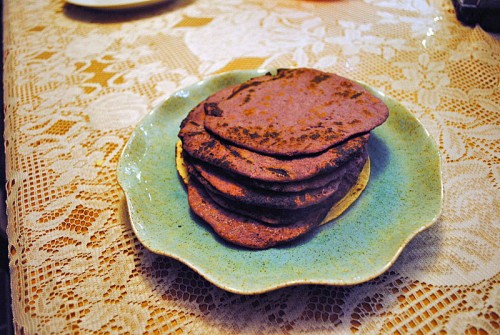 Bring the water to boil, add the hibiscus flowers and sugar, mix and simmer for 5 minutes.  Let it cool until it is just a bit warm.  You will not use all the tea for the dough.

In a large bowl,  mix the masa harina and salt.  Add one and a half cups of the warm hibiscus tea to the flour, incorporate to form a soft, still moist dough.  If necessary, add more tea.   Let the dough rest for 5 minutes, than pinch small portions to make tortillas using a tortilla press.    Cook the tortillas on a hot griddle or cast iron pan.   Keep them warm in a low oven, covered with a damp cloth. 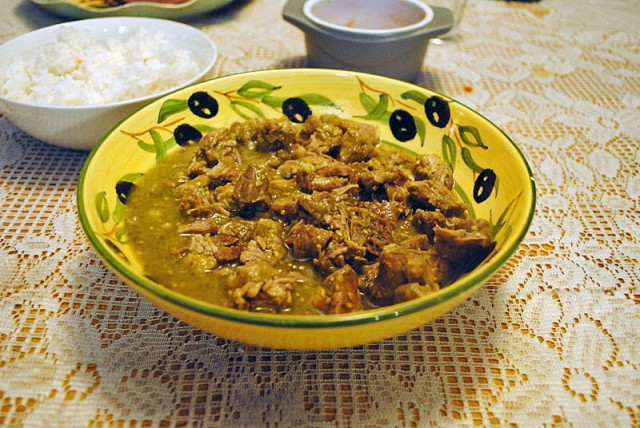 TACOS WITH PORK IN GREEN SAUCE
(from Just Tacos, reprinted with permission from Shelley Wiseman)

Cover the tomatillos and Serrano chiles with cold water in a saucepan, and bring to a boil. Reduce the heat and simmer uncovered, until the tomatillos are tender but still intact, about 15 minutes. Reserve the cooking liquid.

Heat the cumin, allspice berries, and clove in a small, dry skillet, shaking the pan until the spices are fragrant, about 1 minute. Put the spices in a blender along with 1 cup of the tomatillo cooking water and blend until the spices are ground. Using a slotted spoon, lift the tomatillos and chiles out of the remaining cooking water and put them in the blender along with the garlic, cilantro, and 1/2 teaspoon of salt. Blend until fully smooth. Reserve.

Pat the pork dry and season with the remaining teaspoon of salt.  Heat the oil  in a heavy pot over medium-high heat and brown the pork in batches, without crowding, until brown on all sides.  Return all the meat to the pan and add the tomatillo sauce.  Bring to a simmer, then reduce the heat. Simmer the pork, covered, stirring occasionally, until the meat is tender and the sauce is thickened, one and a half to two hours.  Shred the meat with two forks, return to the sauce and make tacos with the accompaniments of your choice.

Comments:  This dinner could very well be a special on Noah’s Taco House! The pork in tomatillo sauce was probably one of the tastiest fillings for tacos I ever had!  You can adjust the level of heat by leaving some of the Serrano chile out of the sauce, but for our taste the full amount had a nice kick.  It is a perfect make-ahead dinner, as the flavors of the pork sauce intensify while sitting in the fridge.

Just Tacos is a must-have cookbook, by the way.  Many variations of corn tortillas are included in the book, as well as countless versions for taco fillings.  In fact, the book cover says it all: 100 Delicious Recipes for Breakfast, Lunch, and Dinner. I give you a few tasty examples: Duck Legs Braised in Chipotle-Tomatillo Sauce, Tacos with Grilled Shrimp in Adobo, Creamy Poblano Chile and Corn Tacos, Swiss Chard and Potato Tacos, Yucatecan Pulled Pork Tacos...

I close this post with a picture that I imagine would bring a huge smile to Noah. One of our dogs, Buck, always lays by Phil’s chair at the  dining table and is usually  very well-behaved.  Somehow the smell of this dinner got to him, and every minute or so he would make his presence a little more obvious, standing up and touching Phil’s arm as delicately as possible with his paws.

ONE  YEAR AGO:  Maui New Year!

Cookie decorating... like learning to ride a bike, in the beginning we rely on training wheels, watching tutorials and making what the real great “cookiers” make and share. It is hard to let the training wheels go, but every once in a while I force myself to do something on my own.... these were one example of "look Mom, no hands!" ;-) Swipe for more pictures. Details on my cookie blog today, link in bio.
Loading Comments...
%d bloggers like this: