A note to subscribers: Google Reader will shutdown on July 1st, 2013. If you have a subscription to this blog through Google Reader, please sign up for email notifications, or switch to another reader. I recommend Feedly or Bloglovin. They will automatically retrieve all your Google reader subscriptions.

We like to have a small bowl of fruit before we go to bed, often while watching a re-run of Law and Order. Actually, I should say Phil loves to have a bowl of fruit, he always offers to make one for me, I decline.  Then we end up sharing.  😉 Sometimes we have apples & diced walnuts, sometimes sliced bananas, or blueberries & yogurt, but these days strawberries are the best choice. With ice-cream season starting, I showed my gratitude for countless evenings of hitting his bowl of fruit by making a batch of frozen strawberry yogurt.  Very little sugar added, non-fat yogurt, this is as light as a dessert can be.  If you have a sweet tooth, this may not be for you. Although you can always cover it with  some chocolate sauce…  it won’t hurt our feelings!

Place berries in a food processor and process until smooth, scraping down the sides as necessary. Add sugar and orange juice; process for a few seconds. Add yogurt and pulse several times until blended. Transfer to a bowl. Cover and refrigerate until chilled, about 1 hour or overnight.

Pour the strawberry mixture into an ice cream maker and freeze according to manufacturer’s directions. Serve immediately or transfer to a storage container and let harden in the freezer for 1 to 1 1/2 hours.

Comments:  The frozen yogurt will be harder than ice-cream when kept in the freezer for several hours.  We put the container in the microwave for 20 seconds and that makes it easy to scoop out our evening portion.   Contrary to our normal routine, I’ve been enjoying my own bowl.  😉

A word about Kitchen Daily:  I discovered this site by one of those fortunate accidents while net-surfing. Just like Everyday Food from Martha Stewart, this site offers a daily recipe arriving in your mailbox. For the most part, everything quite compatible with our style of cooking.  If you want to check their website, and maybe join their daily feed, jump here.

ONE YEAR AGO: Baked Coconut and “The Brazilian Kitchen”

First, let me to introduce the world’s expert on caramelized bananas, my Mom! 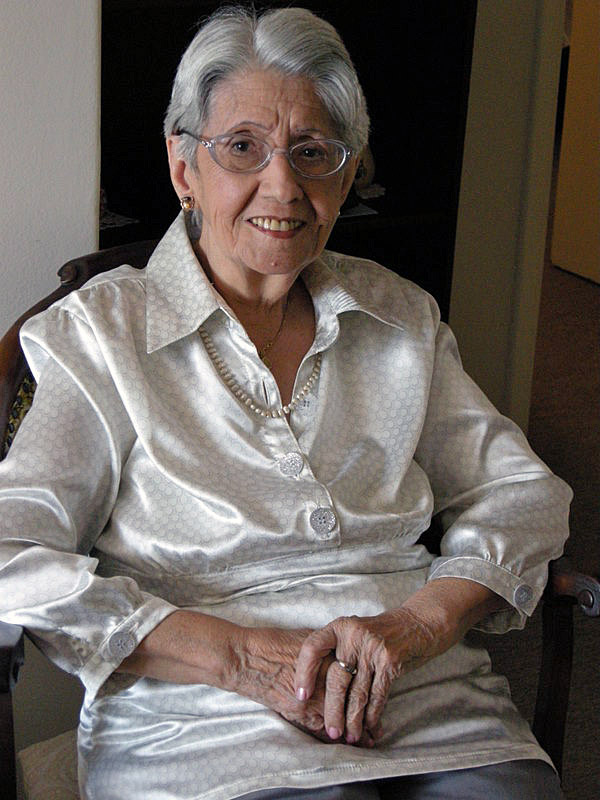 If I had to select one recipe to always associate with her,  I’d pick caramelized bananas.  When I was a child she’d make a batch almost every week,  using different types of bananas from the street markets of Sao Paulo.  Sometimes, depending on the variety she found at the market,  the “doce de banana”  turned almost purple when she cooked it, which was quite interesting.  For my Brazilian readers, “banana prata” was the one that acquired the reddish-purple color.  But, the regular Brazilian banana, which is the one on the shelves here in the US, was her top choice, because both me and my Dad loved it the most.  It gets dark brown, with an intense, sweet flavor and a splash of freshness from the lemon juice squeezed at the end.  So, when I saw this recipe in the February issue of Food and Wine I immediately went to work, making a batch of caramelized bananas, and using some for this delicious frozen yogurt treat. 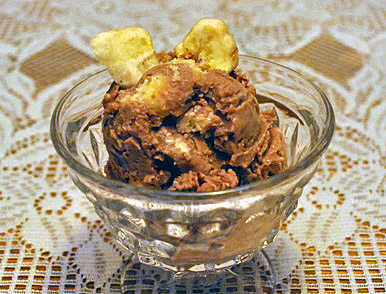 In a nonstick skillet, melt the butter. Add the bananas in a single layer and sprinkle with the brown sugar. Cook over moderate heat, turning once, until caramelized, about 8 minutes. Squeeze a little lemon juice all over.  Remove the pan from the heat, add the rum and swirl the pan to completely dissolve the sugar. Scrape three-quarters of the bananas into a food processor and add 3 tablespoons of the milk. Puree until smooth. Transfer the puree to a small bowl and freeze until chilled, 15 minutes. Chop the remaining bananas and freeze until chilled.

In another bowl, whisk the cocoa with the granulated sugar, salt, vanilla and the remaining 1/2 cup of milk. Whisk in the yogurt until smooth, then the banana puree.

Transfer the mixture to an ice cream maker and churn until nearly frozen. Mix in the chopped bananas and pieces of chocolate. Scrape the frozen yogurt into an airtight container, cover and freeze until firm, at least 2 hours.

Food memories are so powerful!   As the bananas cooked down in the skillet, their aroma whisked me back to my  parents’ home.  Suddenly I was 17 again and rushing  home from school, dashing to the kitchen, all tantalized by the smell of Mom’s caramelized bananas.  Back home people like to pair them with farmer’s cheese or some vanilla ice cream, but I’m a purist: just a small bowl of “doce de banana,” and a tiny spoon to make sure the pleasure lasts longer…  😉

I never imagined using them as part of a frozen dessert, but it is sublime!  The  yogurt reduces the sweetness, but the bits of banana and the chunks of chocolate bring it back, just enough to make you happy.   It is still a light dessert, much lighter than ice cream, and perfect for someone who’s not wild about sugary concoctions.  Come to think of it, the other day I found a recipe online for burnt orange ice cream, and my antennas immediately went up.  But I found that it called for a cup and a half of heavy cream,  a cup of whole milk, a ton of sugar, and 5 egg yolks.  It’s easy to make a decadent dessert with such a surplus of fat, but as David Lebovitz points out in his book “The Perfect Scoop,”  it’s really not necessary, and this frozen yogurt proves his point.   😉

ONE YEAR AGO: Roasted Lemon Vinaigrette