This is a super simple recipe, but one that looks like you spent a considerable effort to bring to the table. I made it sous-vide, but you don’t have to do it this way, I offer alternatives for stove-top cooking. You can also use chicken breasts instead of pork, I made it both ways, not sure which one I prefer, I think the pork makes it easier to roll and looks a bit more tidy in the end. So that’s the one I picked to highlight today.

Butterfly the pork tenderloins and use a rolling-pin or a meat mallet to flatten the meat to about 1/4 inch thick. Protect them with a plastic wrap and sprinkle the meat with a tiny amount of water before pounding. Season with salt and pepper all over.

In a small bowl, stir together the pumpkin purée, the pecans, the Southwest mix, and a smidgen of salt. Spread half the filling on each piece of meat, leaving a ½-inch border around it. Roll up each pork tenderloin jelly-roll style, starting at the narrow end, and tie with kitchen twine (use 4 or so pieces to cover the extension of the roll).

Pour ¼ cup of chicken broth and the apple cider into the bag. Add the roulades, and seal using the water displacement method. Place the bag in the water bath and cook for 5 to 6 hours. Remove the roulades from the bag, reserving the cooking liquid (pass it through a sieve if you prefer a smooth sauce in the end). Place the roulades on a paper towel–lined plate and pat them dry.

In a medium ovenproof skillet, heat the oil over a medium-high heat. Add the pork and brown on all sides. Transfer to a plate and keep warm.  If needed, add a bit more oil to the skillet, add the flour, cook it for a couple of minutes, then add 1 cup of chicken broth plus the reserved cooking liquid. Cook until thick, about 5 minutes. Remove the strings from the meat, cut in slices and serve with the gravy.

For non-sous vide cooking: make the roulades and start by browning them on all sides on a skillet with very hot olive oil. When golden brown, add the chicken stock and apple cider, cover, and simmer gently until cooked through, making sure the liquid comes at least to half the height of the roulades. Depending on the thickness of the roulades, it will take 45 minutes to 1 hour. Baste the roulades and turn them around on all sides during cooking.  Once done, reduce the cooking liquid by boiling, or if you like more of a gravy consistency, do the flour trick as described in the recipe.

Comments: The temperature for cooking pork is a matter of taste. I’ve mentioned it before, we don’t care for pork still pink in the center, so I always go for 150F. You should do what suits your taste. The sous-vide has two advantages, the flexibility in time – you can even push the cooking time a bit further, if needed – and the way it keeps the roulade shape during cooking, even though it is not vacuum-sealed. Of course, the texture of the meat is perfect when made sous-vide, but you can still get a very nice meal on the stove-top, it just takes a bit more of tending during cooking. You don’t want to over-cook the delicate meat, or leave it uncooked in the center.  As I mentioned, I also used chicken breasts, and the rolled effect is not as nice, but it still tasted great. For chicken breasts, I reduced the cooking time to 4 hours, and used 148 F. Probably not much difference from 150F, but that’s what I did. 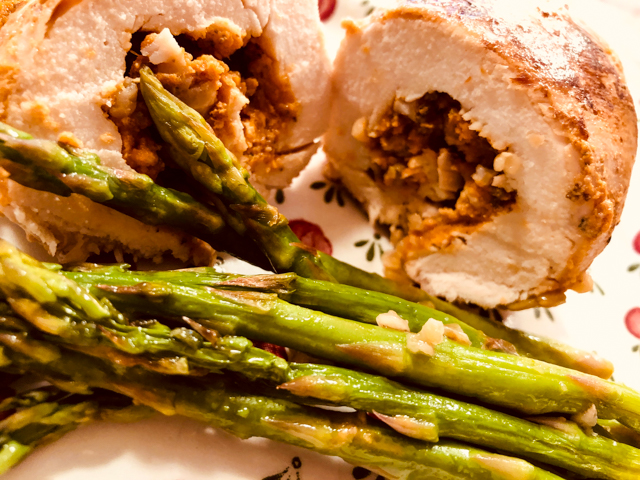 I love to find uses for canned pumpkin puree, because I often use some in a recipe and have leftovers staring at me later. Yes, it freezes well, but there is a limit to the number of little packages one can keep track in the freezer. I rather open a can, use it all up, and move on. When I made the recipe a second time, I did not even toast the pecans and it was still very nice, so a few shortcuts here and there don’t hurt. The sous-vide is perfect for working days. I can prepare it all the evening before, leave the bag in the fridge, set up the water-bath at lunch next day, and arrive home to a nice, almost effortless dinner. A couple of side dishes, and we are set.

ONE YEAR AGO: White-Chocolate Peppermint Macarons

TWO YEARS AGO: Shrubs, a fun alternative to alcoholic drinks

11 thoughts on “PORK TENDERLOIN ROULADE WITH PUMPKIN AND PECANS”