Better late than never, I can finally share a little cake to celebrate my 7th year of  food blogging. I knew I wanted to make a layered cake this time and also knew it had to be from a new cookbook I fell in “love at first page.”  Granted, I have quite a few books dedicated to cake baking, but Layered might be my favorite now. Not only Tessa Huff’s explanations are detailed enough to give confidence to a cake-challenged person, but  many of her cakes have enticing, unexpected flavors. Sure, you will find a chocolate cake, a shortbread strawberry, a Boston cream pie, but she will also awe you with combinations that bring together Raspberry and Stout.… Lavender and Olive Oil... Butterscotch and Bourbon...   Pink Peppercorn and Cherry… Those are included in a wonderful chapter called “Adventurous Cakes.”  I have The Cake Bible from Rose Beranbaum and love it too, but I’d say that about 1/4 of the recipes of that book appeal to me, whereas I would gladly try more than 80% of the recipes from Layered.  Funny thing is that I almost did not buy it because I’m not too fond of naked layered cakes, and that’s what I saw on the cover of the book. Clearly I am part of a minority, as they are very popular these days.  But reading the many great comments on amazon made me change my mind.  So, it’s now officially confirmed the wisdom of:  “Don’t judge a book by its cover.”  HA!

Originally this cake is supposed to have 6 layers, so you’ll make 3 red velvet cakes and slice each one crosswise in half. I baked three cakes, but as I started the assembly next day, I thought it was tall enough using only two of them. Plus, probably due to my inexperience and very limited skills, the amount of frosting I ended up with would not be enough to fill and cover a higher cake. Gravity plays tricks on me on a regular basis, perhaps it’s due to my last name. But, independent of the amount of available frosting, I liked the way it turned out as a 4-layer production, easier to slice and serve.

The cake component…  The cake batter uses grapeseed oil and sugar beaten together. To that, some eggs and red food coloring (preferably gel) are added and incorporated. Then, flour, cocoa powder, baking powder, a touch of salt are sifted and added to the oil mixture in batches, together with buttermilk. Once the batter is smooth, a bit of baking soda dissolved in vinegar gets into the mixer.  The batter is divided equally into three 6-inch cake pans, and baked until a toothpick comes out clean.

The frosting… contrary to most Red Velvet Cakes, this frosting is not based on cream cheese. It is an old-fashioned recipe called “Heritage Frosting” that starts with a thick cooked paste made with milk and flour. That gets incorporated into butter and sugar creamed together with a touch of vanilla. Very unusual, I had never heard of this type of frosting but it was reasonably easy to work with. 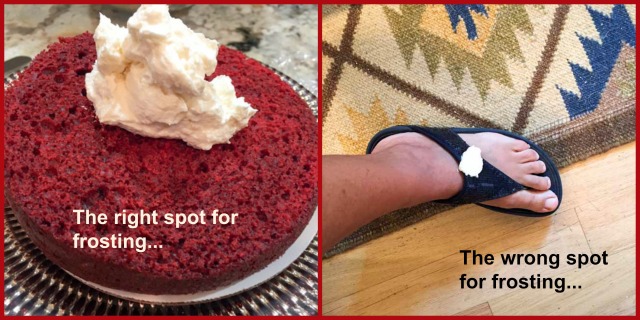 Normally, Buck would be right by my foot and ready to take care of any potential messes. However, having learned painful lessons in the past, I decided that red food coloring and a Jack Russell could be too fiery a match.  Both him and Oscar stayed outside for the duration of my baking adventure. However, they both developed a fascination with my sandal even long after I washed it. Scent of a Frosting. It has movie potential…

Well, for once I will say this cake baking experience was “almost painless.”  At least the cake itself. No problems. A little hyperventilation here, another there, but overall fine. The frosting is another story. Every time I try to frost a cake, I feel this intense respect for those who do it for a living.  I opted for a rustic look, because hell would have to freeze over twice before I could apply a smooth layer of frosting to the top of a cake, let alone its sides…   But even if there is room for improvement in my technique, I think this was one tasty cake!

Here’s what Phil had to say about it:

Quite often the frosting overpowers the taste of a cake, but this was not the case. The cake is flavorful, it has a very nice texture.  It’s substantial without being too heavy. Slices very well with a sharp knife without crumbling all over the place. The frosting is very creamy but stands well on the cake. It is much less sweet than buttercream or double-boiled white icing.  Enthusiastically approved!

Well, after getting enthusiastic approval from the resident cake critic, I enthusiastically invite you  to join me on my 8th year in the blogosphere…

ONE YEAR AGO: Lemon-Lavender Bars

THREE YEARS AGO: Carrot Flan with Greens and Lemon Vinaigrette

SIX YEARS AGO:  A Twist on Pesto

SEVEN YEARS AGO: Ciabatta: Judging a bread by its holes