On the first day of the year… I’d like to say that bread baking is a great way to welcome 2010!   I  debated whether to make a simple sourdough, or to mark another notch in my BBA Challenge-belt.   Once I realized that the BBA bread was a sunflower seed rye, I immediately went to work on it.   From its whole flours and sunflower seeds, the bread casts a healthy aura that’s perfect for this time of the year,  in which we all feel the impact of holiday excesses.

The recipe calls for a soaker and a firm sourdough starter.  Once again, I couldn’t find pumpernickel flour, and settled for a regular dark rye instead.  I still prepared the soaker exactly as described – mixing rye flour with water and allowing it to sit overnight.

The dough rose slowly and less than I expected, but it was fun to shape the ring.   First, form a ball, then poke a hole in the center, stretch it out, and finally make a deep indentation to define quadrants.  I added some flour to try to prevent the square from closing during the rising, but it didn’t end with dramatic look of the picture in the book. 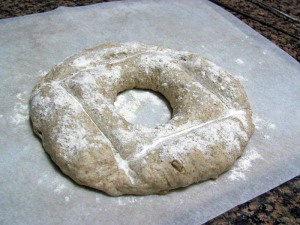 The bread didn’t have the oven-bounce of a typical, white flour sourdough,  but it felt light as I grabbed it from the oven.  The taste was wonderful, hearty, and the toasted sunflower seeds made it just like Reinhart described:  a “loyal” bread, that stays with you long after you enjoy it. 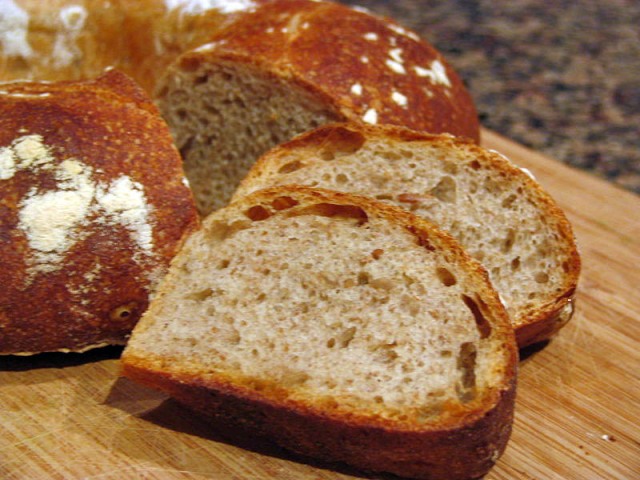 Another winning recipe, and with it completed, only EIGHT breads remain to finish the Bread Baker’s Apprentice Challenge!

I am submitting this post to Susan’s Yeastspotting, my favorite weekly net-event…

On a side note,  my New Year’s Resolution in 2008 was to regularly bake bread.   It’s been two years of ups and downs, many failures but so much fun!  If you’re a believer in New Year’s resolutions, have you considered baking bread?    😉

I love hot air balloons, although I prefer to admire them while I'm safely on firm ground. But, hot-air balloon cookies? What's not to love? They make me smile and dream. These were made after a little video from @montrealconfections, and adapted for my skill level. All details for those and a few other Fall-inspired cookies on my blog today.... Link in bio, swipe for more.
Loading Comments...
%d bloggers like this: