One of the gifts we’ve received during the holidays was a super special box of Royal Riviera pears from Harry and David.  Inside the box, a little card with a recipe for a salad that would make the pears shine.  They ship the pears slightly unripe, with instructions on the best way to store them as they reach their peak, and also on how to tell when they get there.  We had to wait for a little less than a week, then enjoyed the juiciest pears ever!   The salad? It was so good that we made it again a couple of days later… Come to think of it, that in itself is a huge endorsement, because I tend not to crave salads during the cold months of the year.

Make the dressing: Mix together the first five ingredients. Gradually whisk in the walnut oil. Chill for 20 minutes.

Gently tear the lettuce into bite sized pieces. Arrange on four chilled plates. Top with fans of pear slices. Sprinkle blue cheese evenly over the pears and lettuce and top with nuts. Drizzle the dressing generously over the salad, and serve at once. 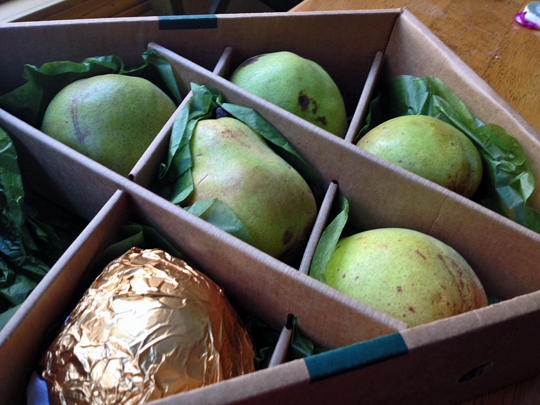 The recipe calls for 1/2 cup of walnut oil, I used a lot less than that but kept the other amounts the same. I like my salad to be just barely coated with dressing and prefer it a little less oily. Also, considering the price for walnut oil, I rather use it with a little less abandon.  😉   On my second time preparing this recipe, the dressing was similar, but instead of walnuts I used very thinly sliced celery.  I mixed the celery with the dressing as it chilled for 20 minutes and then incorporated both into the other components.  Two pears were consumed in the name of this delicious salad, the others we enjoyed late at night, usually watching nice movies…  Like the trilogy:  Before Sunrise, Before Sunset, and Before Midnight.  I highly recommend those, Julie Delpy is simply superb!

ONE YEAR AGO: Keema Beef Curry

TWO YEARS AGO: Pork Tenderloin with Soy, Ginger, and Lime

Three ways to dress up the mini-cake concept on my blog today. Full recipe for the mini-bundt, link to @sugaretal IG page for the Pistachio-Rose version. Visit my blog with a cut and paste from here or a link in my bio.
Loading Comments...
%d bloggers like this: