Let’s imagine for a moment that dinner parties are still “a thing.”  Those days feel like a lifetime away, but I know they will come back at some point. When? I have no idea. But when they do, allow me to offer a recipe for mashed cauliflower as your side dish. I promise you, this one will please every single one of your guests, even those who twist the nose at anything low-carb. The secret is topping the mash with roasted grape tomatoes (you can use yellow or a mixture).  It turns into a luscious, satisfying, flavorful side dish that will go well with pretty much any protein you are featuring as the star of your show.

MASHED CAULIFLOWER WITH ROASTED GRAPE TOMATOES
(from the Bewitching Kitchen)

Start by roasting the tomatoes. Place them as a single layer on a baking dish covered with aluminum foil. Drizzle the olive oil, balsamic vinegar, and season with salt and pepper. Roast at 400 F until they start to get golden brown and release some juices. Reserve.

Cut the cauliflower in florets and cook in slightly salted boiling water with a bit of lemon juice until fork-tender.  Add to a food processor (ok if a bit of water goes with it), and add the yogurt, nutritional yeast, olive oil, and spices. Process until smooth, taste and adjust seasoning, or even a bit more lemon juice if you like. Transfer to a baking dish. Top with the roasted tomatoes, but don’t add too much of the tomato liquid, just a little bit.

Place in the 400 F oven for about 10 minutes to warm everything together. If the mashed cauliflower is looking more on the dry side, you can warm up covered with foil. If it seems a bit loose, warm it with no foil on top.

Serve right away with the main dish of your choice. 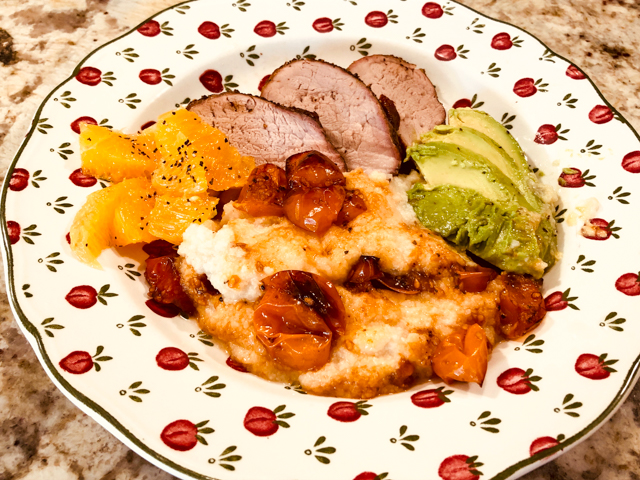 Comments: This was one delicious meal! The pork tenderloin is very similar to the one I shared recently, made in our smoker, with a bit less pepper. A little avocado and orange on the side, and we were ready to dig in. Felt like a dinner party…

ONE YEAR AGO: Coconut and Lime Macarons

FOUR YEARS AGO: Pecan-Crusted Chicken from Southern at Heart

SIX YEARS AGO: Chestnut Brownies and a Blog Award!

TEN YEARS AGO: Golspie Loaf, from the Scottish Highlands

Regular readers of my blog will likely say to themselves – there she comes AGAIN, with yet another recipe for mashed cauliflower.  When is she going to stop?  Probably not in the near future, because I keep finding interesting ways to enjoy one of my favorite side dishes. This version turned out pretty tasty,  so I must share with you, magnanimous person that I am. I got the idea from a post over at  Closet Cooking, and made a few changes to use what I had around in the fridge.  The spinach adds a lot in terms of flavor and nutrients.  This one will definitely be a regular appearance at our table. 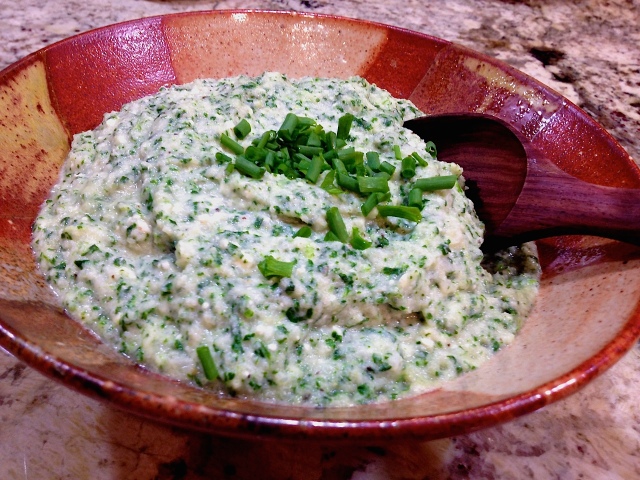 Place the cauliflower in a steamer over boiling water and steam until fork tender, about 10 minutes. While the cauliflower cooks, sautée the fresh spinach in olive oil until wilted. Season with salt and pepper, add a little lemon juice and reserve.  Place the cooked cauliflower in the bowl of a food processor.  Add the feta cheese, yogurt, nutmeg, salt and  pepper, and process until well combined.  Add the reserved spinach, process for a few seconds.  If too thick add almond milk until you reach the right consistency.   The puree can  be warmed up for a minute in the microwave if the cold ingredients added to it cooled it down too much, but probably it will not be necessary.

I loved this take on cauliflower puree so much that I made it again the following week,  using kale instead of spinach, and adding a little bit of sun-dried tomato to the mix.  It turned out almost great, but not quite.  A few details that I should have paid more attention to compromised the quality of the dish. I used chopped kale, pre-bagged, thinking it would make my life a lot easier. Well, it did, but it didn’t.  In the bagged version, the stems are chopped together with the leaves, so because I cooked them very little to preserve that nice bright green color, the stems were a bit tough.  Not pleasant in the middle of the smooth cauliflower puree.  So, my advice is to either go for spinach, or if you like the assertive taste of  kale, buy the leaves, and chop them. If the food police is not around, you can discard the stems, but if you have guilty feelings about it, cook the kale in two steps, stems first, leaves at the end.

This is such a nice side dish, it goes well with almost anything, from seafood to beef, and leftovers keep well in the fridge.  I bet they could be wonderful made into little fritters, adding an egg, maybe a bit of almond flour. This spinach version I shared today we enjoyed a while ago with Chicken Thighs with Roasted Tomato Salsa. The kale variation was matched with another interesting recipe from Cooking Light magazine, which I shall blog about in the near future: a Cremini Mushroom Meatloaf, which is actually a lot more mushroom than meat. Great recipe, stay tuned…   😉

ONE YEAR AGO: In My (NEW!) Kitchen

TWO YEARS AGO: The Lab Move and New Beginnings

I am not sure why it took me so long to try almond milk, but  I fell in love with it the moment I tasted it.  This one is my favorite, the plain and lighter version made by Silk.   It is part of my daily routine now, half a glass of almond milk right before going to work, and another half after lunch.  Shockingly cold is best, by the way.   Phil used it in his lunch smoothies in place of  yogurt and loved it too. My passion for almond milk started me on a virtual expedition in the internet chasing for recipes using it in cooking.   I was pleasantly surprised to find quite an extensive number of possibilities.  My first adventure with Silk was a winner:  cauliflower puree.  I share with you the recipe,  inspired by Food and Wine.

SILKY CAULIFLOWER PUREE WITH ALMOND MILK
(from the Bewitching Kitchen)

Prepare the cauliflower by removing the outer leaves and the central core.  Cut the florets off, slicing the large ones in two or three pieces.

Heat the oil on a skillet. Saute the celery, onion, and red bell pepper until the onion is golden, and the mixture is very fragrant. Season with a little salt and black pepper.   Add the cauliflower to the skillet and cook it on high heat for a couple of minutes, stirring often.  Transfer the mixture to a saucepan so that the cauliflower fill it no more than halfway up.   Add almond milk to the saucepan and bring the mixture to a boil.   Reduce the heat, cover the pan keeping the lid slightly ajar, and simmer for 15 to 20 minutes, until the cauliflower is tender.

Transfer the cooked cauliflower to the bowl of a food processor, keeping the almond milk in the pan.  No need to drain it completely, the amount of liquid that stick to the florets will help ensure a nice texture.   Process until smooth.  If necessary, add a little more warm almond milk.   Test for seasoning.   Serve warm.

As I said, my first adventure with almond milk in cooking won’t be the last. In fact, I have this recipe on my “to try soon” folder, and hope I can actually switch it into the “tried and true”  in the near future.  One store in town normally carries Marcona almonds, which is the only tricky ingredient to find. With that in hand, I should be good to go.

Probably because I used light almond milk instead of full fat, the liquid seemed to separate a little as the cauliflower cooked. It definitely did not harm the dish, so if you use the light version, ignore its looks.  It will all come together in a silky happy ending!

Our dinner felt quite special, considering it took place at the height of our kitchen renovation. Here is the full menu for that evening:  roasted chicken thighs marinated in beer-soy-orange (marinade to be blogged about soon), green beans with almonds, and the cauliflower puree.  Mr. Hamilton roasted the chicken thighs, Mr. Breville broiled the skin for a couple of minutes, and our single burner induction stove took care of the rest.  A few sautéed almonds on top of the puree tied both side dishes together quite nicely… even if I say so myself…   😉

ONE YEAR AGO: Beef and Broccoli Stir-fr
.

Those who are familiar with low-carb diets know that cauliflower is the number one choice as a substitute  for potatoes, and even rice.  Indeed,  I’ve seen recipes in which the florets are grated and used in what it’s called  “cauli-rice.”   I don’t think it would fool me, though, I love rice way too much!  😉  Now, back to puree…

Potatoes have enough starch to produce a creamy and smooth texture when cooked and mashed.  Other veggies like cauliflower, broccoli, even parsnips, end up with a more watery and grainy texture.  For that reason, most recipes will coach you into adding a lot of butter, heavy cream, or some type of cream cheese.   Sally Schneider, author of  “The Improvisational Cook,” came up with a very clever twist: she cooks the veggie in milk (low fat is fine), and adds to the cooking liquid an apple and a little bit of pasta (like angel hair).  The result is amazing.  Never in a million years I expected Phil to urge me to blog about a cauliflower recipe. His exact words were:  “make sure you really pump this recipe up, it’s awesome”!

CAULIFLOWER AND APPLE PUREE
(adapted from “The Improvisational Cook“)

Cut the cauliflower florets and stems roughly into pieces. Add the pieces to a pan with the milk/water, apple, bring to a gentle boil.  Add the pasta, salt, and sugar.   Cook, stirring every once in a while, until the cauliflower is tender (25 minutes).

Remove 1/4 cup from the cooking liquid and reserve. Strain the vegetables (the rest of the milk/water can be used for soups later), place them in a food processor and puree for a couple of minutes, until completely smooth.  Make sure to stop and scrape down the sides of the bowl once or twice.  If too thick, add some of the reserved cooking liquid.

Return the puree to the pan, place it over very low heat, add white pepper, taste, and adjust the seasoning with more salt and pepper.

Schneider’s book is perfect for those who like to use recipes as a starting point instead of a rigid set of rules.  She opens each subject with a section called “Understanding,” explaining the reasoning behind the recipes in that section.  Finally, she offers  suggestions to improvise on your own.
I absolutely love this approach!

This puree is silky-smooth, you won’t taste the apple, but it really does something to “tame” the cauliflower flavor, so even those with “cauliflower issues” will be pleased.   Of course, because there’s a small amount of pasta in it, this dish won’t be as low in carbs as a pure cauliflower version, but it is still  much lighter than mashed potatoes.   Sometimes, it’s exactly what we crave…

ONE YEAR AGO: Vegetarian Lasagna