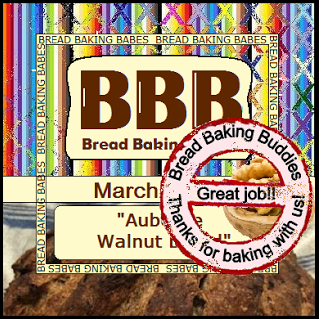 Every once in a while I see a recipe and get “the itch.”  It will not leave my mind until I make it. Not only I catch myself thinking about it in the middle of the day, but I often dream about it. In my dreams, I might gather the ingredients and jump into action, or sometimes get into an almost nightmare mode in which I cannot read the ingredients or find them in my pantry. The mind works in odd ways. I have no idea why some recipes do this to me, but the most recent example was the Auberge Walnut Bread blogged by Karen, as part of the Bread Baking Babes group. It is a fun virtual event, also happens monthly as The Secret Recipe Club, but in this case a member of the group picks one bread recipe and everyone makes it. This month’s bread was chosen by  Elizabeth, hostess of From OUR Kitchen.  I highly recommend you stop by and indulge in her blog. She is hilariously witty, and keeps a wonderful site!  Back to BBB, I have thought about joining the group because c’mon, who would not like to be a “Babe?” However, I don’t think I can handle another monthly commitment. Instead, I watch them from a safe distance and marvel at all the breads they bake.  Until  now, that is.  When I saw Karen’s post, I got the itch, and because it is a bread that doesn’t require a sourdough starter, I made it right away. You should too. You won’t need to knead it by hand, you won’t need to fold it, baby it, watch it, nothing. It is one of the easiest bread recipes to tackle, and the result will blow your mind: a soft, moist, flavorful crumb, with a darker color than you would expect from a bread made only with white flour. Smells amazing as it bakes, tastes amazing with anything you’d like to pair it with.  But I advise a little blue cheese.  To quote Karen… 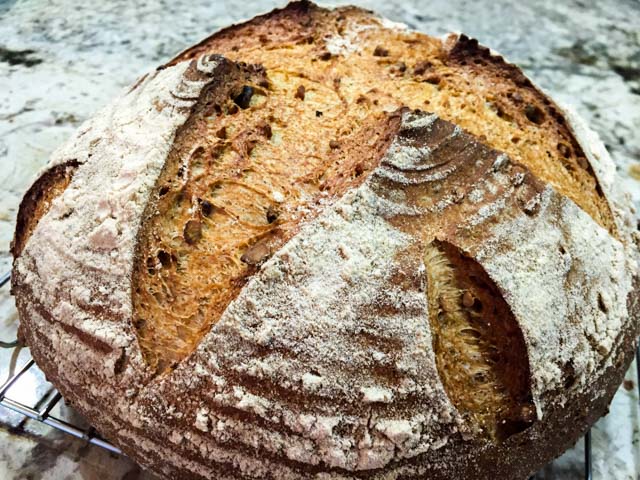 120 grams pecan pieces
50 grams walnut pieces
7 grams (one package) active dry yeast
85 grams (1/4 cup) honey (I used acacia)
320 grams (1 + 1/3 cups) warm water
30 grams (2 tablespoons) olive oil
500 grams (3 + 3/4 cups) bread flour
7.5 grams (1 + 1/2 tsp fine sea salt)
.
Heat the oven to 400 F. Spread the pecan and walnut pieces in a baking sheet and toast them in the oven for about 7 minutes. Let them cool. Pulse them in a food processor until you have both crumbs and medium pieces.
.
In the bowl of a stand mixer, add the yeast, honey, and warm water. Stir and let stand for about 10 minutes. Add the olive oil, flour, sea salt, and walnut pieces. Stir with a dough whisk or wooden spoon until the ingredients are combined. Knead with the dough hook for about 5 minutes, until the dough is fairly smooth. Place the dough into an oiled bowl and cover with plastic wrap. Let rise until doubled, about 75 minutes.
.
Lightly flour your work surface and turn the dough out without deflating it.  Shape the dough into a ball and place in a floured banneton for the final rise. Cover with oiled plastic wrap and let rise until doubled, about 60 minutes.  While it rises, heat the oven, with a baking stone (if you have one) on the middle rack, to 400 degrees F.  When the dough has doubled, invert it on a sheet of parchment paper, slash the surface with a razor blade and quickly place it over the baking stone.  Use your favorite method to generate steam (I invert the lid of a Dutch oven slightly moist and bake the bread covered for about 20 minutes). Bake at 400 F for 10 minutes. Reduce the oven temperature to 350 degrees F and bake for an additional 40 minutes.  Cool on a wire rack.
.
ENJOY!
.
to print the recipe, click here
. 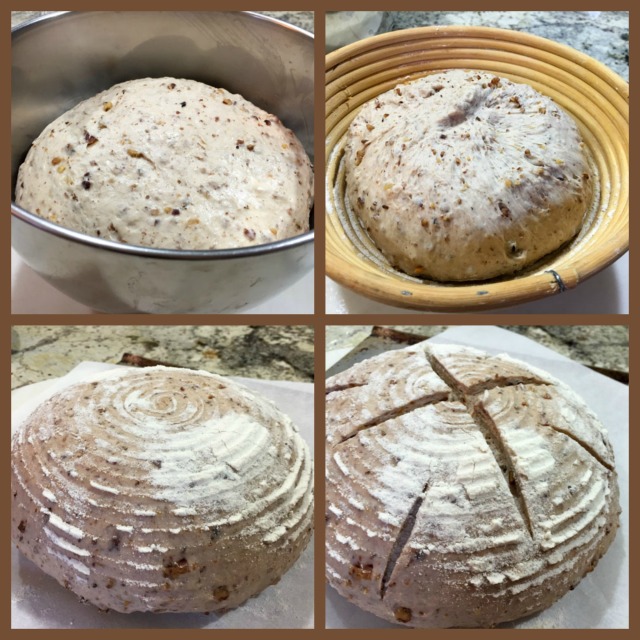 .
Comments: As you know, I love sourdough baking, but there’s something wonderful about having a loaf of bread cooling less than 3 hours after gathering the flour.  In fact, the dough was quite fast to rise, it did not need 75 minutes for the bulk fermentation, in 65 min it was more than doubled, so I shaped it. And instead of allowing a full hour for the final rise, I decided it was good and ready at the 50 min mark.  I toasted the nuts the evening before, and added them to the food processor right before mixing the dough. Easy as pie, except for the fact that the goal was to make a walnut bread and it turned into a pecan bread with a hint of walnuts.  It is my personal saga, a perverse Flour-Vinegar-Nut trilogy. When it comes to those items, I am always stumped by the difference between what “I think I have”, and what “I do have” in the pantry.  But, I can tell you that pecans worked very well, and the bread tasted terrific! Very moist, I am sure it would have lasted for several days at room temperature, but since it’s just the two of us, on the second day it was sliced and frozen for   future enjoyment.
. 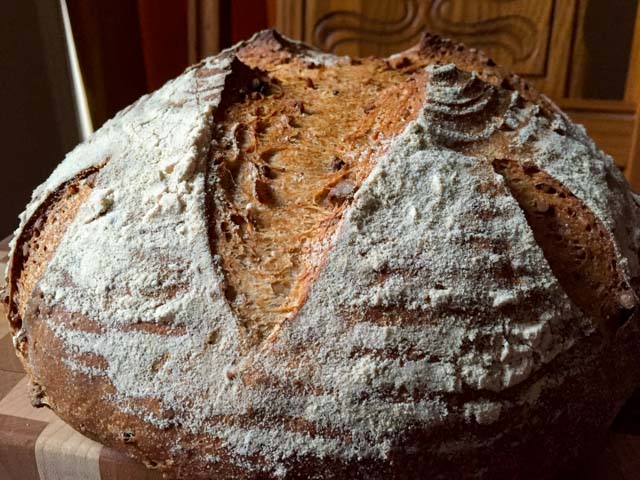 Elizabeth, it was great to “meet” you! Looking forward to following your adventures… And of course, Karen, you never cease to inspire me with your bread baking and cooking in general… Nice to have one more recipe from your site showcased in the Bewitching Kitchen… 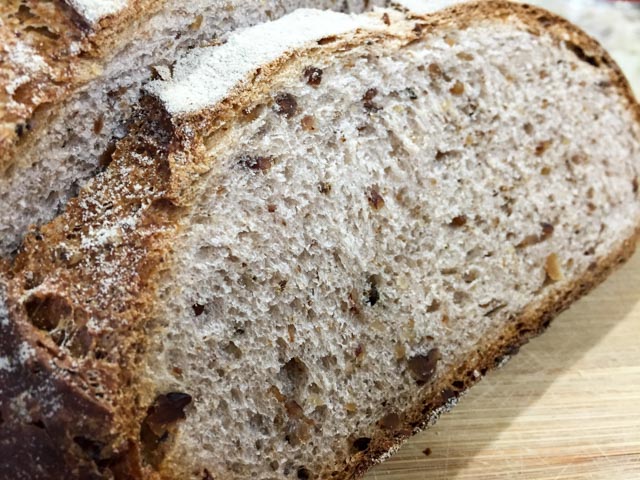 .
ONE YEAR AGO: Gluten-free and Vegan Raspberry Bars
.

THREE YEARS AGO: Sourdough Bread with Walnuts and Dates

Normally, I would shy away from baking a bread using exclusively whole wheat flour, because often they turn out dry, heavy, and not too flavorful. But those folks at King Arthur Flour know their bread extremely well, and recently highlighted in their blog their most popular recipe, a 100% Whole Wheat Bread. They promised that it would produce “a moist, close-grained, nutty, and rich bread, that slices as a dream.”    They did not lie: this is a deliciously hearty loaf, not heavy at all, with a hint of sweetness from the honey, perfect to start your day on a very “good carb-note.” 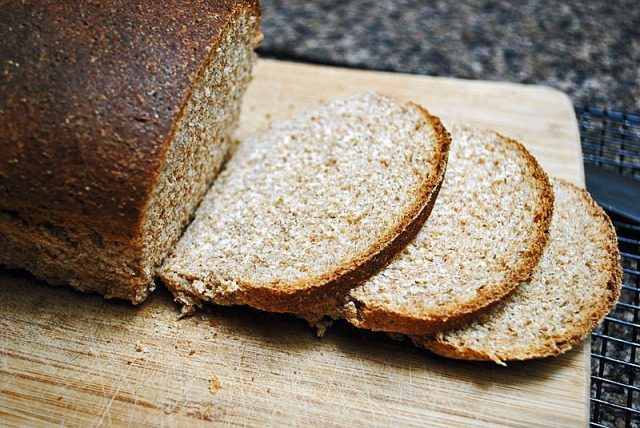 In a large bowl, combine all the ingredients and stir till the dough starts to leave the sides of the bowl. Transfer the dough to a lightly greased surface, oil your hands, and knead it for 6 to 8 minutes, or until it becomes smooth. Alternatively, knead it in a KitchenAid type machine (I did that for about 7 minutes at speed 2).

Transfer the dough to a lightly greased bowl or large measuring cup, cover it, and allow the dough to rise till puffy though not necessarily doubled in bulk, about 1 to 2 hours (mine doubled in a little over 1 hour).

Transfer the dough to a lightly oiled surface, and shape it into a loaf. Place it in a lightly greased 8 1/2″ x 4 1/2″ loaf pan, cover the pan loosely with lightly greased plastic wrap, and allow the bread to rise for about 1 to 2 hours, or till the center has crowned about 1″ above the rim of the pan (mine took only 1 hour to reach that point). Towards the end of rising time, heat your oven to 350F.

Bake the bread for 35 to 40 minutes, tenting it lightly with aluminum foil after 20 minutes to prevent over-browning. The finished loaf will register 190°F on an instant-read thermometer inserted into the center.

Remove the bread from the oven, and turn it out of the pan on  a rack to cool. If desired, rub the crust with a stick of butter; this will yield a soft, flavorful crust (I omitted this step). Cool completely before slicing.

Comments: The variable amount of water given in the recipe accommodates for differences in humidity and temperature in each kitchen.  Start with 8 ounces and see how the dough behaves. It is very important not to add too much flour, or it will be too heavy.

Instead of using my regular oven, I baked this loaf on our Breville toaster/convection oven, and it performed very well. It is a fantastic appliance, one that will be used more and more in the near future.   😉

ONE YEAR AGO: Basic French Bread

Avert your eyes, bread baker purists!    The dough for this bread is made in a food processor, and takes about 5 minutes to prepare,  from measuring the ingredients to setting the dough to rise. The recipe comes from Pam Anderson’s “The Perfect Recipe“, and I’ve made it many times in my pre-sourdough starter days. I still make it, when I want homemade bread but don’t feel like slaving over the  preparation. Simple, straightforward, quick, and best of all: works every time!

Sprinkle yeast over the warm water, let stand while you measure the other ingredients.

Add the flour and salt to the bowl of a food processor and process a few seconds to mix.

Add the cold water to the yeast mixture, and with the motor running, pour it into the processor, allowing it to mix until it starts to form a ball. Adjust with water or flour if it feels too dry or too sticky. Process for 30 seconds.

The dough should look like this at the end of processing… 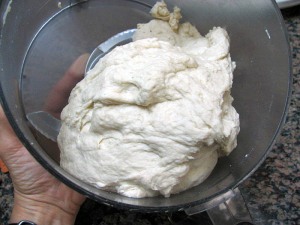 Remove it from the processor, knead it a few times by hand, and place it in a warm spot to rise until doubled in size (1 to 3 hours, depending on the type of yeast and temperature of your kitchen – mine doubled in only 55 minutes). 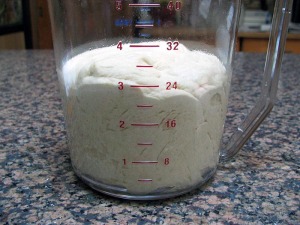 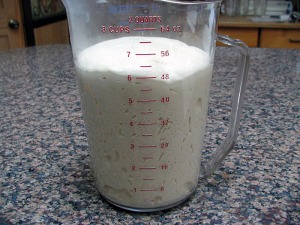 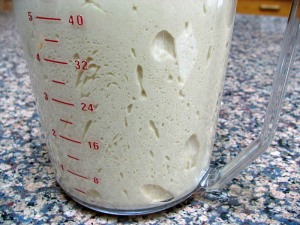 The dough makes enough for 2 loaves or 12 rolls. Shape them whichever way you like, I made half the recipe as rolls, and formed a loaf with the rest of the dough. Set them to rise for 45 minutes to 1 hour, until almost doubled in size. 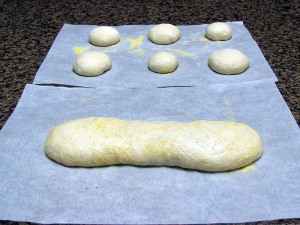 Make a deep cross-cut on top of the rolls using scissors;  slash the loaves with a blade or very sharp knife.  Bake the breads  in a 450F oven: rolls for 20 minutes, loaves for 40 minutes.   I bake my breads covered by a roasting pan for 3/4 of the baking time, then remove the cover  to get a nice dark golden crust. 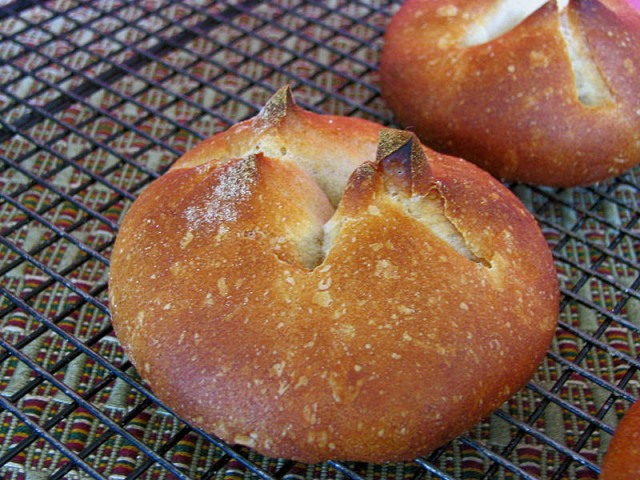 I am submitting this post to Susan’s Yeastspotting…  Make sure you drop by to enjoy the weekly collection of breads she offers every Friday.