With this post I bring you two recipes, one of them so simple that it’s hard to call it a recipe. However, both were so delicious that made the main dish (you know, for us carnivores the meaty component) seem like a mere supporting actor in the play. I warn you, though, my pictures of the eggplant concoction did not turn out particularly great, but if you go pass its looks and make it, you’ll fall in love with it. The recipe was on Foodbod, hosted by Elaine, aka The Vegetarian Goddess. She always comes up with amazingly creative recipes for veggies, and this one also features a nice story behind it. You should stop by her site to read all about it. A fainting priest is involved. How about THAT for adding spice to a recipe? As to the other side dish,  it was a humble spiralized butternut squash. Oh. Em. Gee. I wish I had tripled the amount because Phil and I ended up fighting for the last strand, and well, I won. I like to think it was due to my relentless tropical charm. But perhaps the hissy fit spoke louder. 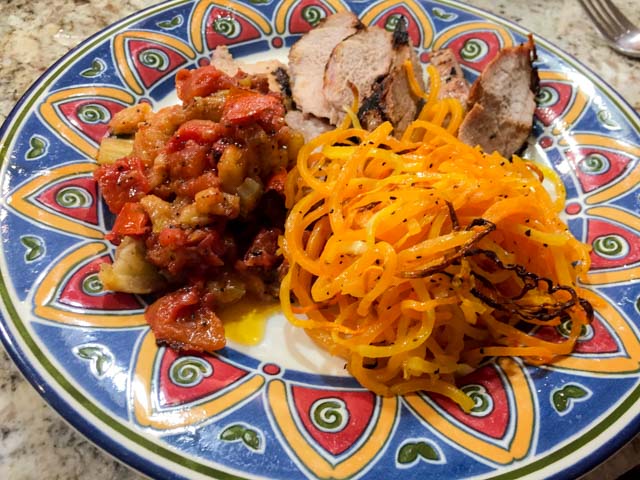 In a pan over a medium heat, heat a good glug of olive oil then add the shallot and celery and start to soften. Add the chopped eggplant and cook for a few minutes.  Add the spices and salt and cook for a minute. Add the tomatoes and cook it all down to a lovely sauce.  Stir in the lemon juice and take it off the heat.

Place your eggplant in an oven proof dish, slit side up. Open it as much as possible and spoon the lovely sauce into the eggplant as much as you can then spoon the rest over and around it. 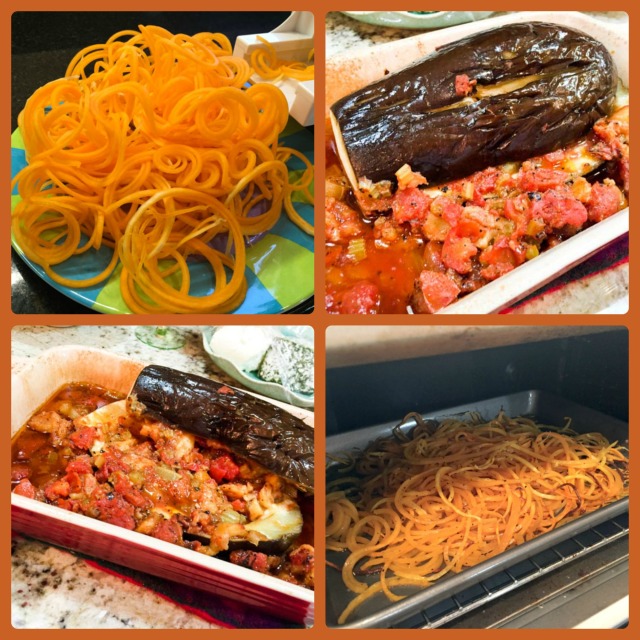 Comments: When I read all the praise that Elaine gave to the eggplant recipe, which in her side of the planet goes by as “aubergine” (so much cuter it’s not even funny), I was intrigued, but to be completely honest I didn’t think it was possible for something that simple to be so amazing. Sometimes I love to be proven wrong. The tomatoes and spices interact with the flesh of the eggplant turning it into something with incredible depth of flavor. You’ll have to make it to believe me. This basic method can be adapted to other spices and herbs, what matters here is to allow the slow roasting to take place, don’t rush it.  I can visualize the eggplant turned into a pasta sauce, or even a flavorful addition to a risotto. It would be great as a spread on sourdough bread even. One dish, endless possibilities.

Now, let’s focus on the spiralized butternut squash – just use the neck of the squash for this preparation. Peel it (I know, I hate it too), and grab your favorite spiral cutter to make the strands. Then, coat them lightly with olive oil, season with salt and pepper and roast for about 20 minutes at 400 degrees F (about 200 Celsius).  You can move the strands around after 10 minutes or so.  Make more than you think you need, even if you are serving it to folks with squash issues. And watch their issues turn into craving…

Elaine, thanks for another gem of a recipe!
I wish my photos turned out better, but taste comes first, right?

ONE YEAR AGO: Venting on Vaccines

THREE YEARS AGO: Sourdough Bread with Walnuts and Dates

11 thoughts on “WHEN SIDE DISHES STEAL THE SHOW”