As I’ve mentioned before, I am a huge fan of FoodTV’s The Kitchen. The crowd brings a mixture of different types of talent and cooking styles, they are funny, witty, it’s a great way to spend an hour on Saturday mornings. Often they will have guests, but for the most part I don’t care that much for them. Usually they are hosts from other cooking shows in need to advertise their cookbook, some are so in love with themselves that they get me into that state of non-stop eye-roll.  A particular OMG-We-ARE-So-Cool American-Italian couple comes to mind. I had to fast-forward that one, I have my limits. A few months ago they featured Robin Chapman, a nice older woman to share her recipe for a slow-cooker concoction called Mississippi Roast. I know, roast in the slow-cooker seems like a contradiction in terms, but that’s how the recipe goes. Anyway, apparently Mississippi Roast got stellar reviews all over the internet, went fully viral on Pinterest, to the point of calling the attention of Sam Sifton from The New York Times. He went searching for the original author. And that’s how she ended up at FoodTV. As I watched her preparing it, my shock and horror kept growing. I could not picture myself making it for us. A real dump and forget approach to the slow-cooker, involving a bag of powdered ranch dressing to make things more “interesting.”  The fun part was watching Geoffrey Zakarian trying to keep his cool. I would love to know his real thoughts as the cooking went on. Of course, I promptly removed the recipe from my mind. Then, one day I got notification of a new post by Mike, the blogger behind The Iron You. My chin dropped. He made it. He raved about it. He tweaked it with a few modifications (taking it on the same path Sam Sifton suggested), which definitely improved the recipe. No more powdered ranch (wink, wink). I caved. I made it. I absolutely loved it. Have already made it three more times. If you are a meat lover, grab your slow-cooker, and try this one. 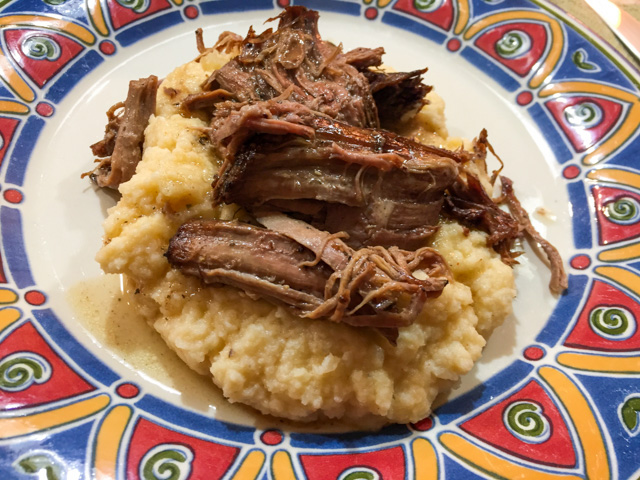 MISSISSIPPI ROAST
(slightly modified from The Iron You)

Rub salt and pepper all over the roast.

Heat oil in a large pan over high heat until it is shimmering and almost starts smoking. Place the roast in the pan and brown on all sides, about 4 to 5 minutes per side, to create a crust. Remove roast from the pan and place it in the insert of the crock pot.

Using two forks, shred the meat and mix it with the gravy surrounding it.

Comments: This was scrumptious. As usual, brown food is pure ordeal to get a nice picture, so you better trust my words. I had never tried pepperoncini and was not sure what kind of flavor they would contribute. It is a very nice pepper, mild, almost lemony. One of the changes I made from Mike’s version was to omit the cornstarch coating of the meat. My sauce turned out a bit thin, but we don’t mind that. I served this “roast” with mashed cauliflower (shown in the picture). with spaghetti squash the second time around, and with rice and beans on the third. Leftovers were always consumed with corn tortillas for a Tex-Mex version. Some Cotija cheese crumbled on top, a little guacamole and we were all set. The original version from Robin Chapman uses a full stick of butter on top of the meat. To me, that is overkill, but if you’d like to try it as initially conceived, jump to the FoodTV link and check it out. 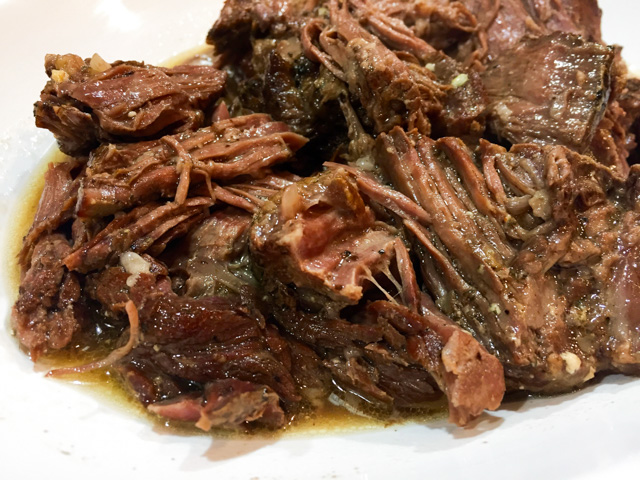 I am very fond of any type of meat that you can shred with a fork, to me it says comfort food right away, and holds the promise of many tasty meals ahead.

So there you have it. I learned a lesson with this one. Don’t twist your nose at something just because it’s not exactly your style of cooking. A few tweaks here and there, and you might end up with a recipe that will win a spot in your regular rotation.  Of course, now I’m wondering if there’s really anything to be said for ham braised in Coca-Cola. Hey, I’m not making that up. It is a real thing!

ONE YEAR AGO: Walnut-Raisin Bran Muffins

TWO YEARS AGO: A Star is Born!

SEVEN YEARS AGO: Zen and the art of risotto