December 14th will be forever tainted as one of the saddest days for the United States. Unspeakable tragedy, unbearable pain for all those involved in the shooting at Newtown. One full year has passed.  Very little improvement in gun laws has been made. This is not a politically oriented blog, so I’ll leave it at that.  But, it is up to each of us to never forget what happened and put pressure on Congress to act.

I would like to recommend a fantastic article from the Nicholas Kristof, “The Killer Who Supports Gun Control“.  Thank you, Farine, for bringing it to my attention.

One of the boys whose life was cut short was so fond of tacos that he hoped to one day work in a “taco factory”.  To celebrate his memory,  I am sharing a recipe for a simple, but tasty taco today.  This one is for you, Noah. 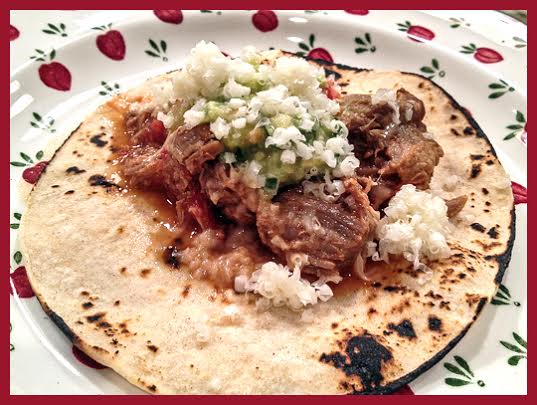 3 pounds of pork butt, with plenty of fat
1 cup of orange juice
juice of 1 lime
3 cups of water
2 teaspoons of salt

Cut pork into strips (three inches by one inch), add to a large pot with the liquids and salt. Bring to a boil and then simmer uncovered on low for 2 hours. Do not touch the meat.

After two hours, turn heat up to medium high, and continue to cook until all the liquid has evaporated and the pork fat has rendered (about 45 minutes). Stir a few times, to keep pork from sticking to bottom of pan.

When pork has browned on both sides, it’s ready (there will be liquid fat in the pan). Serve either cubed or shredded (pork will be tender enough that just touching it will cause it to fall apart).

Serve it over rice or use it as a filling for tacos with your favorite toppings.
.
Share it with someone you love…
.

If you want to learn more about the lives of the children and adults who lost their life in December 14th, 2012, visit “My Sandy Hook Family”.
.
The grown-up world has failed you horribly and still does.
(from Farine, in her letter to Noah, June 2013)