This side dish was the marriage of two regular appearances in our kitchen: quickly sauteed zucchini and air-fried chickpeas. The union was celebrated with a nice amount of tahini sauce.  I tell you, this worked very very well. If you don’t have an air-fryer, roast the chickpeas in a 400-420F oven. It takes longer and the texture won’t be quite as crunchy, but it will work just fine.  I intended to sprinkle pomegranate seeds right before serving for a little extra bling, but of course that day the grocery store had ran out of them. Best laid plans.

LEMONY ZUCCHINI AND CHICKPEAS WITH TAHINI-SAUCE
(from the Bewitching Kitchen)

Make the tahini sauce: whisk all ingredients in a small bowl. Reserve.

Make the air-fried chickpeas.  Coat them lightly with olive oil, add the spices and place them in the air-frier set at the highest temperature (usually 390F) for about 12 minutes. They should be crunchy and golden brown.  Reserve.

Heat the olive oil in a 12-inch non-stick skillet, add the zucchini covering the whole surface, season with salt and pepper. Let the slices cook undisturbed until the side in contact with the pan is well seared. Move the slices around and cook until done. Sprinkle lemon juice all over, cover the pan for a minute, remove the lid, add the chickpeas and parsley.  Serve immediately with the tahini sauce on top. 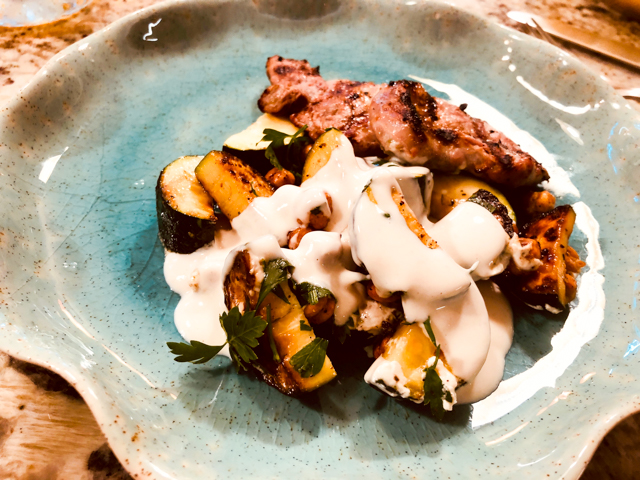 Comments: When I was a child, teenager or even young adult, you could not bribe me to eat chickpeas, which in Portuguese have the non-appealing name of “grão-de-bico”. It translates – loosely – as “the grain of the beak”. They can also be called “ervilha-de-galinha”, which ends up as “chicken’s green peas”. Yeah, very sexy. How could anyone consider that a delicacy? Anyway, now I crave it. Go figure.

Leftovers were delicious a couple of days later. In fact, I found out that air-fried chickpeas, when microwaved just enough to make them warm, get a nice texture, a bit more creamy inside. My lunch coupled this tasty concoction with a fried egg on top.  I was smiling the whole afternoon.

THREE YEARS AGO: Going naked, and my husband loved it

SEVEN YEARS AGO: Into the Light Again

NINE YEARS AGO: The Nano-Kitchen

12 thoughts on “CHICKPEAS AND ZUCCHINI WITH TAHINI SAUCE”