I suspect that many people have never tried it, and that those who saw manioc root for sale didn’t take it home, because it looks too strange and intimidating.   That’s  all quite sad, because it means they’re missing this: the Brazilian version of french fries.

For many Brazilians, “mandioca frita” is even better than french fries.  I know, it sounds heretical, but trust me – once you try it you will be hooked.  Crunchy outside, creamy inside, with a flavor that can only be described as addictive.    I won’t lie to you, mandioca  frita takes some effort.  But  if you follow my instructions you won’t regret it.

Manioc, also known as cassava and yucca, is a major ingredient in many cuisines of the world.  You can read all about it here.

To cook the manioc, you first must peel it, a task that requires a good quality veggie peeler.  The root is often sold covered with a thin layer of paraffin, but don’t worry about it, just peel the brown skin to reveal the  white root underneath (Don’t even consider feeding the peel to your garbage disposal – you’ve been warned!).

Here’s a before and after shot… 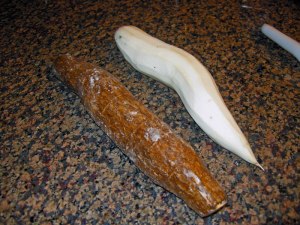 Next, using a big, sharp knife and some caution cut it into pieces:  it’s a reasonably tough root….

… now you’re ready to begin cooking.  Fill a large pan with slightly salted water, and place the pieces of manioc inside.  Bring it to a boil, reduce the heat and allow the pieces to cook until they’re tender, easily pierced with a fork  (the time is somewhat unpredictable,  anywhere from 25 to 50  minutes).  Some pieces might burst open;  just remove them from the water.   In this photo you can see what they look like when ready. 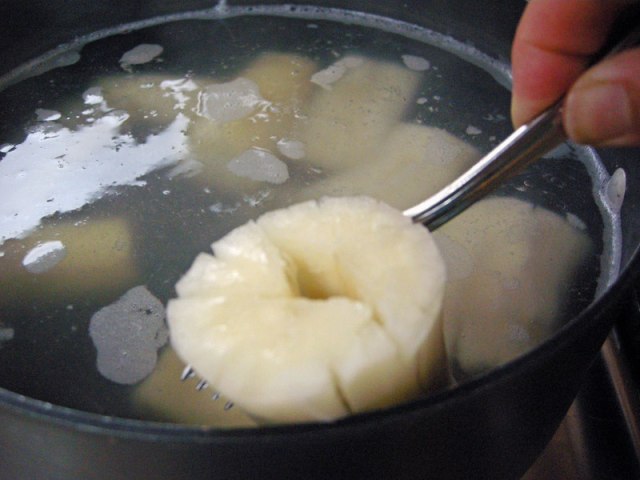 Cooking manioc is a labor of love.   Not all the pieces will be ready at the same time, and some pieces might never become tender.  In Brazil, “mandioca” is sold in street markets as well as grocery stores, and similar to what happens in France, once you establish a relationship with a particular seller in your neighborhood,  you’ll always have great quality mandioca.  😉

Once you cook it, you’ll notice a tough “string” in the very center of the root:  remove it before frying.  It’s too tough to eat, although it won’t hurt you if you don’t remove it. 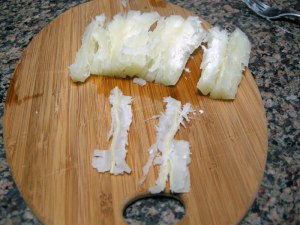 Here in the US I’ve found excellent manioc root in Asian markets, but as you can see from the next photo, in the same batch I had a mixture of varieties (white and yellow), something that never happens in Brazil, because they would be sold separately.   Their taste is almost identical, although in my family you might witness heated discussions defending the qualities of one kind over another.  To avoid taking sides,  I pledge endless love for both.

At this point you can fry them right away or save them for later.  I normally cook a large batch, fry as many as we want for dinner, and then freeze the rest.  If you have a vac-saver system, you can use it to store the  cooked manioc root.    When you want to fry them, simply remove from the freezer and let them sit for half an hour; no need to even completely defrost them,  although I wouldn’t go straight from frozen into the hot oil.

To fry the cooked pieces, add 1/2 inch of vegetable oil to a large skillet  and heat it until the manioc sizzles when it touches the oil.  Fry as many pieces as will fit without crowding, and allow the first side to brown before moving them around, or they’ll get a bit greasy.    When finished frying, put them on absorbent paper and add some salt to taste.

Now, close your eyes, and dream of a tropical beach, coconut trees, a hammock, and perhaps a refreshing “caipirinha” with your mandioca frita! 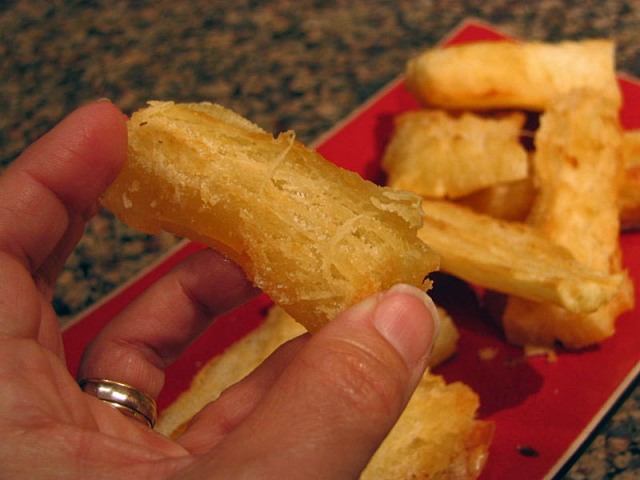